It's All About Power, Cheap Power, And Without It... 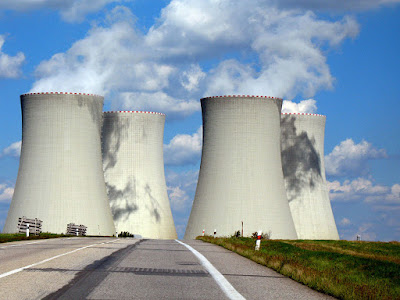 There's only one reason that coal has played such a huge role in today's world - it's a cheap way to get the heat needed for thermal-electricity generation. Coal is cheap. So, too, has been water - the yin to coal's yang in electrical generation. Without cooling water, you don't have a generator. You merely have a torch. In other words, no water means no power.

Coal, of course, is not an isolated situation. Other forms of thermal energy including gas, oil and even nuclear also depend on plenty of water for cooling. And, while fossil energy remains cheap and abundant, the supply of water is today anything but secure. Did I mention climate change?

Hydro- and thermo-electric (nuclear, fossil-fuelled, biomass-fuelled) power plants are vulnerable to dwindling rivers and reservoirs as the planet warms, a study published in Nature on Monday said.

These technologies, which provide 98% of global electricity supply, depend on abundant water to cool generators and pump power at dams.

Lower river levels and warmer water temperatures could reduce generating capacity by as much as 86% in thermo-electric- and 74% in hydro plants, according to researchers at Wageningen University and the International Institute for Applied Systems Analysis.

It comes as water demand for power generation is set to double within the next 40 years, the report said. Drought-stricken hydro producers have reverted to dirtier energy sources in the past to shore up tottering grids.

Global warming is set to boost river levels in Canada, India and central Africa as global weather patterns shift. Yet most hydroplants are in regions forecast to see shortages, like South America, which generates almost two-thirds of its electricity from hydro.

Did you catch that last bit, the part about Canada? Yes, we're expected to be okay for precipitation "as global weather patterns shift." That's not to say that our precipitation will be steady, reliable - the sort needed for hydro-generation. Overall, though, we should be reasonably okay.

Did you catch what's missing in that last bit, the part about the United States? Our neighbours to the south, especially the southern States, aren't expecting any bountiful rainfall patterns. The multi-year drought that recently hit Texas led to periods when there wasn't enough water to cool thermo-electric utilities. The double whammy comes in that the time when electrical demand spikes is during heatwaves when people want to crank up the air conditioning.  When people most need to cool themselves is when their energy supply becomes unreliable.

A few years ago, the waters of Long Island Sound got too warm to cool a Nuclear powerplant.

Sometimes I wonder if its all worth the effort. After all, you're going to die anyway.
Sometimes the price of eggs isn't worth the wear and tear on a hens ass.

Coal is cheap because those who use it aren't costed for their externalities. If coal producers and users had to pay for the cost of cleaning up their mess coal would become prohibitively expensive. Simply removing the subsidies and tax breaks from coal would drive the price up.

Ditto for the rest of carbon based energy.

In another 50 years, we'll look back at Maude Barlow the way we look at Tesla today. She'll be a national hero in hindsight.

@ Rumley - I seem to recall something about that. Now, with steadily warming oceans and more extreme heat events, I wonder what they'll do.

John's Aghast - that is one of the best lines I've heard in a good long time. I'll try to commit it to memory. Thanks.

@ Toby - Our sophisticated economies have been built by externalizing natural capital be it the atmosphere we turn into our industrial emissions dump or the fresh water we allow to be consumed for little or nothing and contaminated often at no cost. A great deal of wealth has been amassed on the back of natural and 'public' property.

Marie, to be blunt, I'm not sure there'll be too many people looking at Maude or anything in fifty years. I certainly won't and I don't regret that as much as I would have in times past.

I once thought it was a fanciful notion that intelligent life is self-extinguishing. I don't find much fanciful in that any longer.

It's our fondness for the greedy algorithm that gets us into trouble every time.