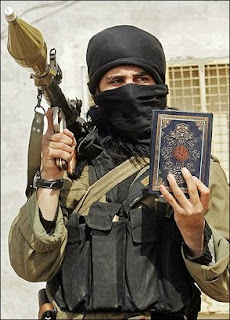 It kinda makes you wonder why we're getting drawn into this. Five centuries after Europe endured the catastrophic Thirty Years War a similar calamity may be building in the Middle East. Only this time it won't be Catholic and Protestant
Christians butchering each other but Sunni and Shiite Muslims going at it.

Gwynne Dyer describes how the future of Islam could - perhaps - play out.

From the start of the conflict in Europe, however, each European state tried to help its co-believers in neighbouring countries, and alliances were increasingly shaped by religious considerations.

In the second phase, these alliances dragged most of Europe into the catastrophic Thirty Years’ War (1618-1648), fought mostly in the middle of Europe but involving armies from as far apart as Sweden and Spain.

The main battleground, Germany, lost between one-third and one-half of its population. Nobody won, of course, and in the very long run everybody just lost interest in the question. But it was a very great waste of lives, time and money.

The Muslim world is already caught up in the first phase of a comparable process, but it is not condemned to go the whole distance.

...U.S. President George W. Bush’s invasion of Iraq in 2003 unleashed the sectarian demon in the region. The “Arab Spring” of 2011 frightened the region’s dictatorships and absolute monarchies into increased repression and greater reliance on appeals to sectarian loyalty. Then King Abdullah of Saudi Arabia died a year ago, and the kingdom spun out completely.


...The new Saudi king, Salman, is 80 years old and infirm, so in practice most decisions are made by his nephew, Crown Prince Muhammad bin Nayef (aged 56), or his son, Deputy Crown Prince Muhammad bin Salman (aged 30). There is intense competition between the two men for the succession to the throne, and the decisions coming out of Riyadh have been much bolder than ever before.

The past nine months have seen a major Saudi Arabian military intervention against the Shia side in the Yemeni civil war, the creation of a Saudi-led alliance of almost all the Sunni-majority Arab states, and now the execution of a Shia leader in Saudi Arabia that was clearly calculated to cause a diplomatic breach with Iran.

It’s dynastic politics, in other words, not some inevitable geopolitical juggernaut. But it was similar dynastic politics half a millennium ago that triggered the worst phase of the Christian wars of religion.

It's hard to see how what the Infidels are doing is going to ease rather than worsen the religious tensions in the Muslim world. If our ongoing Crusade is against terrorism then we're allied with the wrong Muslims. However, as Dyer observes, most of the big players - that would include the American legion - have already lost the big picture.
Posted by The Mound of Sound at 9:36 AM

A Sunni/Shiite war is what it looks like to me and has for some time. For some reason or reasons I don't understand, Westerners just can't resist getting involved.

As Dyer reminds us, Mound, nobody won.


Toby, I wish I didn't feel like Canada is simply part of America's Foreign Legion and that America is in service to the Saudis in this looming conflict. As I listened to Obama castigate Iran for its human rights abuses and as a notional state sponsor of terrorism even as he gave the Saudis a blanket pass, praising SA and the Gulf States as our allies, it gives meaning to Dyer's warning that we have already 'lost the big picture.'

@ Owen - yes, nobody won. That also encompasses our adventures in the Muslim world over the past 15-years. We haven't won a damn thing.

Since Blair and Bush we have entered the first stage of a hundered year war.
Complicating the issue is that should Saudi Arabia go to war then a whole lot of oil will not be available ; crippling the worlds economy.
Adding to this complex issue are SA worldwide investments and it's purchase of $billion weapons systems that feed western economies.
I see no end to the situation.
Perhaps a more enlightened world will free itself from religion and greed but I doubt it.

"...invasion of Iraq in 2003 unleashed the sectarian demon..."
The Pandora box in Iraq & Libya was not opened by accident...
A..non


"Pandora's Box" it is indeed. Hubris/Nemesis. Those whom the gods would destroy they first make mad.

They haven't forgotten. We operate on forgetting.