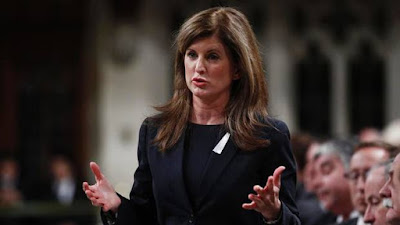 The Tory hairpiece masquerading as interim leader, Mona Ambrose, says  the Liberals are ill-equipped to deal with the Conservative's parting gift to Canada, a 'rapidly deteriorating' economy.

Mona might not remember how her party, while in government, did everything in its power to transform Canada into a petro-state which largely accounts for our 'rapidly deteriorating' economy now that world oil prices are in the crapper.

Let's see. The new government came to power inheriting a fiscal mess, the result of Stephen Harper's failed economic potty-training. For most of his Decade of Darkness, Harper ran consecutive deficits, adding some $150-billion to the national debt. He left the country in a deficit compounded by a recession topped off by a devastated petro-economy.

Mona obviously forgot that when her former government came to power it inherited just the opposite of what it left behind on getting the boot. The Liberals had balanced the budget, paid down a big hunk of our national debt and ensured that the federal treasury was nicely stocked for a rainy day. Harper wasted no time dismantling all that to ensure that Canada was laid low when a rapidly deteriorating economy arrived in 2008.

Ambrose said the Liberal government should take a page from the playbook of former prime minister Stephen Harper, who during the 2008 financial crisis, released a federal budget early to put anxious Canadians at ease.

"We need a plan, we really need a plan on the economy," the Edmonton area MP said. "A budget is still apparently months away. It could be the end of March, and it's really important right now in our economy that we do have a plan, that we have some strong signals from the government," Ambrose said.

Mona, please, some of us still recall Shifty's "Pinata budget" of 2009 that delivered almost nothing by way of effective stimulus. And, yes, you had to prorogue Parliament to come up with even that.

She really is Canada's answer to Michelle Bachmann.

.. what a despicable woman.. partisan political sellout trash.. she fits right in with the rest of her fellow yellow creepy deceivers .. the hypocrisy is beyond astounding.. like Tony Clement, Arthur Hamilton, Ken Boessenkool, John Baird, Ray Novak et al .. off the Richter Scale of 'Beyond Redemption'


I'm with you, Sal. She truly is despicable and for someone so incredibly dim!

Her name is Rona not Mona.

Her name is Rona and it rhymes with 'Yawanna?' Bet that was fun in high school.

She's been trying to get even ever since.


It's Rona? Really? Damn, she sure looks like a Mona to me.

PS All cons should be asked if they know the price of tarsands oil. Then they need to explain why it's Notley's and JT's fault.

Read the whole thing for laughs. Down near the bottom you'll find Canadian bitumen $8.35/barrel.

Thanks, Justin and Rachel

If her name is Mona, can I call her SloMo ?

I think the Mound was just revealing his Venetian heritage.

Didn't we just have an omnibus election, getting rid of Harper should have taken all the dweebs with him. Her hairdo is what Stevies would look like if he let it grow and colour it.

And it's on our dime Mound, that we have to listen to this idiot babbling!