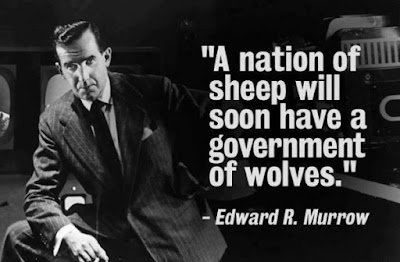 One of the now shopworn themes on this blog has been the critical need, for the survival of our people and our democracy, to rebuild an informed electorate. I have long argued that the first, essential step in democratic restoration in Canada is to dismantle our corporate media cartel.

In this week's essay, Chris Hedges, gets into how America is being dumbed-down, democratically emasculated.

The decades-long assault on the arts, the humanities, journalism and civic literacy is largely complete. All the disciplines that once helped us interpret who we were as a people and our place in the world—history, theater, the study of foreign languages, music, journalism, philosophy, literature, religion and the arts—have been corrupted or relegated to the margins. We have surrendered judgment for prejudice. We have created a binary universe of good and evil. And our colossal capacity for violence is unleashed around the globe, as well as on city streets in poor communities, with no more discernment than that of the blinded giantPolyphemus. The marriage of ignorance and force always generates unfathomable evil, an evil that is unseen by perpetrators who mistake their own stupidity and blindness for innocence.

Those few who acknowledge the death of our democracy, the needless suffering inflicted on the poor and the working class in the name of austerity, and the crimes of empire—in short those who name our present and past reality—are whitewashed out of the public sphere. If you pay homage to the fiction of the democratic state and the supposed “virtues” of the nation, including its right to wage endless imperial war, you get huge fees, tenure, a television perch, book, film or recording contracts, grants and prizes, investors for your theater project or praise as an pundit, artist or public intellectual. The pseudo-politicians, pseudo-intellectuals and pseudo-artists know what to say and what not to say. They offer the veneer of criticism—comedians such as Stephen Colbert do this—without naming the cause of our malaise. And they are used by the elites as attack dogs to discredit and destroy genuine dissent. This is not, as James Madison warned, the prologue to a farce or a tragedy; we are living both farce and tragedy.

The dumbing down of the country—fed by the crippling of the safe spaces where ideas, dissent and creativity could be expressed, where structures and assumptions could be questioned—accelerates.

Presidential candidate Donald Trump may be boorish, narcissistic, stupid, racist and elitist, but he does not have Hillary Clinton’s carefully honed and chilling amoral artifice. It was she, and an ethically bankrupt liberal establishment, that created the fertile ground for Trump by fleecing the citizens on behalf of corporations and imposing the neoliberal project. If she is elected, Trump may disappear, but another Trump-like figure, probably even more frightening, will be vomited up from our cultural and political sewer.

The problem, as I see it, is that the vast majority like everything dumbed-down.


Toby, I've come to realize just how thoroughly conditioned we have become. My focus has mainly been with the corporate media and how it narrowed our political focus even as it fed us a diet of directed messaging packaged as information.

During of the Bush presidency, 60 Minutes did a segment with two senior Republicans who described their party's information/propaganda programme which used a 3-tier formula for disseminating even blatant falsehoods. Notions were launched in open-line radio where they were repeated (laundered) enough to progress on to cable outlets such as FOX where, again, they were repeated enough, processed, until they permeated mainstream media outlets even to the top, The New York Times.

The example they used was the Swift Boat campaign to discredit John Kerry. It was, of course, a complete fabrication, a total smear job. It was launched on Limbaugh and other rightwing open mouth radio shows. From there it was FOXified and spread through other cable news/public affairs operators and finally made its way straight into the New York Times. In the process a complete tissue of lies was fabricated into conventional wisdom.

It's a powerful vehicle for both distraction and disinformation and I doubt the lunatics of the Tea Party would have gained such power without it.

Another example is the non-event 'scandal' over climate scientists allegedly doctoring facts. There never was anything to it but a large segment of the public believed it to be true.

Then there was the survey that found 60% of FOX viewers believed Saddam's WMDs had been located fully two years after the White House admitted that none existed.


It's not that, you pompous ass. This is not a forum for you to post YouTube music videos. They add nothing to the conversation. I feel the loss of David Bowie, most of us do. That doesn't mean there's any reason for you to find some YouTube video and post the link here. There isn't. Move along.

.. unfortunately.. its difficult to distill Marshall McLuhan into a compulsory innoculation for those transfixed by TV advertising with its tagalong pablum TV.. whether Reality, Fashion, Insult, Gossip etc. Chris Hedges does a fab job.. but can't get through. The stunning rise of either idiotic or disastrous political animals is exactly as described - 'what is vomited up from the sewer'

What we need is new heroes who can jam reality in the faces of the masses by their actions. Unfortunately, being a hero these days is a tough gig.. Snowden for example.. or that corporal now ensconsed in prison for life. I'm still patiently waiting for the guy or girl who blows the bizarre Harper, Novak, Byrne, Hamilton vipers nest sky high. Poutine scattered everywhere & a stinking stench that folks will never forget

I always remember that great Tom Wolfe story of attending a strip bar for lunch in San Fran with a dozen Financial Bankers in identical blue suits and Marashall MacLuhan. On entering one of the bankers proclaimed in shock 'my God.. they're naked!' But in that split second Marshall said 'No they're not.. they're wearing us !'

I sure don't have the solution.. but believe modern folklore and modern heroes are desperately needed. I also believe we have reached a Media Tipping Point.. where public perception & belief can be driven via the web - the world is essentially networked.. and just as creeps can rise to pre-eminance.. so can whistleblowers, folk heroes, artists tip the media scales against them.

p'raps our politicians partisan pundits et al.. are just that..
Strippers .. and they're wearing us ..

Some I believe, dance privately
and provide even more 'services' than massage or message
but then.. that might be gilding the lily

I think you nailed it, Sal, when you observed that Hedges does a terrific job but just can't get through. Like automatons we've been conditioned by so much received wisdom, enough that we've come to believe things that, on those increasingly rare moments when we're able to see them clearly we come to realize are untruths essential to our conditioning.

Hedges frustrates me. He tells highly detailed stories of disgusting scenarios. He is a rage and disgust profiteer. Never looks for or reports on solutions.

Failing to fund a big public media insures the existence of a commercial, marketing - led media, which becomes a tool for the rich to misinform the public for profit.

I feel so alone. It seems no one else in the world gets this, that to enable a progressive society we need to create a big public media to replace the disgustingly inequitable media of the 21st century.

In Canada this would require new legislation - The Canadian Streaming Public Media Act.

with a $40 billion per year budget to fund a you pick and everyone pays system - National Streaming Public Media Service.

Streamed electronic media is different than hard commodities. To produce one extra barrel of oil costs almost as much again as the first barrel of oil. The cost of producing one extra copy of a media program is almost zero.

It does not make sense to have media streaming mega corporations acting as monopoly gate keepers collecting a fee for each copy streamed. ( net flicks, apple to name two )

Hi, Brian. You've touched on a common theme of this blog - the need to dismantle the corporate media cartel as the first step in democratic restoration. I'm not so ready as you to abandon conventional information services because I doubt the public is on that page yet. It will, however, come there with time.

We need the most diversely held media representing the broadest spectrum of political views from far left to far right and everything in between. This means prohibiting undue concentration of ownership and media cross-ownership in markets small and large. In other words, we must compel divestiture, break up the cartel.

Hi Mound' I feel like there are 2 issues. Need for anti monopoly legislation and need for big public funding. There seems to be several people including yourself talking about the first and I agree totally on that.

What about the second issue? Has anyone else proposed the - like a big public library thing? they talk about - "pick and pay" but they don't talk about "you pick and everyone pays."

Not sure if you are an American. I am a Canadian. We have a Canadian Broadcast Act but we do not yet have a Canadian Streaming Media Act. That is what I am hoping for. Modeled roughly on our Canada Health Act. The Health Act essentially puts in place around $200 Billion of funding for heath services in the country. A Canadian Streaming Media Act that provides $40 Billion of funding for streamed media that is free of advertising, would quickly resolve the problems associated with relying on advertising revenue. http://no-ads.ca/why-replace-media-ads/