As the World Burns 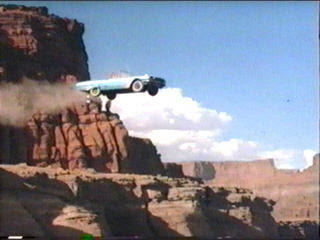 When you're roaring toward the cliff edge does it really matter if it's a jackboot or a Gucci loafer smashing the gas pedal into the floorboards? That's kind of how I feel about the body politic in my country these days.

Maybe the Gucci loafer isn't the problem. Maybe the gas pedal is simply jammed. Perhaps it was hammered too many times by the jackboot and now it's stuck. Does it really matter? Do we have time to waste figuring out who is to blame and for how much of what ails us?

I read a truly dreadful interview with a couple of climate scientists in The Guardian recently. There really wasn't much new in it but it presented a stark reminder of how detached from reality our leaders have become on the greatest existential threat ever faced by mankind.

You might recall how, at the Paris climate summit in December, the nations of the world tabled their emissions reductions promises which, if all those promises are honoured (yeah, cross your fingers), they'll result in warming/heating of 3 degrees Celsius above pre-industrial temperatures by 2100. The target has, for years, been 2C. We're promising, maybe, 3C - maybe more.

One highlight of the Paris summit was a tacit recognition that the old 2C target was simply wrong. If we're to have a reasonable (not great, reasonable) chance of avoiding the worst impacts, i.e. runaway global warming, by 2100, we must not exceed 1.5 degrees Celsius. Yippee, we agree! We've seen the light. 1.5C it is, maybe.

Except for one little snag.

As of now we're already at 1.5C (deferred). Without another tonne of atmospheric CO2, we've already 'baked in' warming of 1.5 degrees Celsius. We don't have to lift another finger to get there. It's in the bag. And so, as we haggle over how many more gigatonnes of greenhouse gas emissions this country or that country should have, we're negotiating to blow straight through 1.5C,  way past it. All this talk, it's gibberish. Utterly disconnected from reality. Hogwash of the particularly lethal sort.

Professor Andy Ridgwell of Bristol University puts it this way:

We have 1.5°C already programmed in, so even if we bring emissions right, right down, immediately, now, we already have 1.5 degrees! So how we’re keeping to a 1.5-degree threshold isn’t clear.

So a fun thing we’re doing now with our very fast warming is the ocean surface warms up and the deep ocean is still cold, which is partly why we have this programmed-in warming that we haven’t seen yet. The deep ocean hasn’t yet noticed that the planet at the surface is rather warmer. If we just sit here at current CO2 levels and let the system equilibrate, it’s 1.5°C anyway. Which comes back to COP21 - what is this 1.5°C target? We’ve emitted the CO2 to reach 1.5°C already, so I don’t know what they’re thinking of!

I wonder if this awkward fact was on the table when our newly-minted federal environment minister met with her provincial counterparts last week. Did they have a "Holy Shit, we've really got to rein in these emissions if our grandkids are to have a snowball's chance" moment? Somehow I doubt it.

As we race toward the cliff edge we've got our eyes glued on the rearview mirror. No one wants to see what lies ahead. No point glancing at the speedometer either.

Maybe the gas pedal isn't stuck. Maybe we're just on cruise control. I expect it really doesn't matter unless we intend to do something about it.

Our capacity to go through life with blinkers will be the death of us, Mound.

We don't see the crisis we're in, Mound. Rarely do we ever see what we're truly facing.

I think I'm in one of those phases of resignation. I so wish we, as a global civilization, could do something sensible to curb our overpopulation, slash our over-consumption of essential resources and halt (as in dead stop) our ever growing greenhouse gas emissions.

I wish we would sober up and recognize all three of these challenges need to be resolved if we're to have a meaningful outcome on any of them. One, two, three - we have to sort them all out.

Our leaders don't understand that you can't grow an economy at exponential rates without commensurate increases in consumption of resources (raw material and energy), production and waste. Our global environment has reached a point where that's self-defeating and yet we persist in it.

Africa, Asia and South Asia can't seem to grasp that we can no longer keep adding people by the billions. Lifeboat Earth is already shipping water over the gunwales. No one is even talking about wrestling mankind's population down to 3-billion or less which is where we need to get. If we don't do that, James Lovelock's prediction that we'll probably end the century with a global population well under one billion is probably accurate.


What we forget about "tipping points" is that we based our 2C target on averting these points. We wanted to stop short of triggering natural feedback loops that, back then, we imagined were still decades off. Now we're witnessing these feedback loops coming into play - retreat of glaciers, ice caps melting, polar sea ice disappearing, tundra wildfires, permafrost melting and releasing methane, sea and lake-bed methane deposits melting and streaming into the atmosphere, the loss of forests and spreading wildfires.. on and on. Each of these is a tipping point passed, an uncontrollable feedback loop now underway that we cannot possibly arrest.

As these two scientists mention, climate change on the scale now underway has occurred before but over a span of tens to hundreds of thousands of years. It's never happened over just a few centuries. Nature's ability to adapt over such a truncated interval is almost nil.

All of which suggests to me that there is something to the theory that all intelligent life is self-extinguishing.