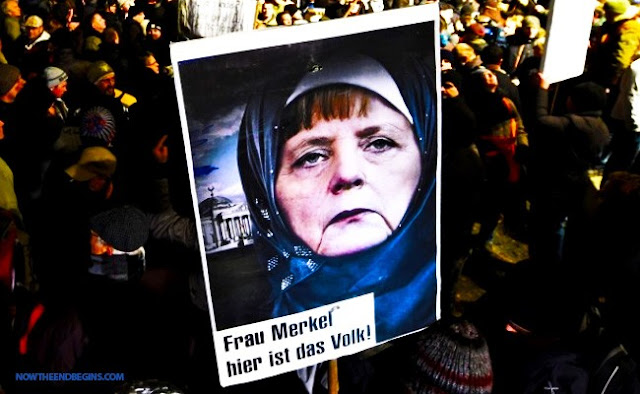 Many years ago The Economist ran a cover story with a 'barbarians at the gate' theme that speculated whether Europe should wall itself off from the peoples to the east and the south. For years ever since Europeans, especially the Germans, have struggled with 'guest workers' and, in Old Europe, the arrival of economic migrants from Eastern Europe as those countries joined the EU.

Germany and France have had particular problems with integrating Muslim newcomers into their societies. It has fueled the rise of neo-Nazi groups in Germany and has left a legacy of racial tension between the French and their North African population. Atop that lies terrorism - the Lockerbie/Pan-Am bombing, the Islamist attacks on London and Paris, the radicalization of European Muslim youth and their recruitment into the ranks of al Qaeda and ISIS. It all tended to give rise to an "enemy in our midst" xenophobia that appears to be taking hold in Europe.

Bombings are one thing. Shooting up crowds in cafes another. But a coordinated campaign of sexual attacks on women in Cologne on New Year's eve allegedly by Muslim men may be have sparked what could become a wildfire.

The plight of Germany's and, to some extent, all of Europe's Muslims was made more difficult when Ralf Jaeger, interior minister from North Rhine-Westphalia, announced the New Year's eve sexual predators were all Arabs and North Africans, i.e. Muslims.

"Based on testimony from witnesses, the report from the Cologne police and descriptions by the federal police, it looks as if people with a migration background were almost exclusively responsible for the criminal acts."

According to his report, of the 19 suspects identified by name, 10 were asylum-seekers and the other nine were believed to be in Germany illegally.

None were registered as living in Cologne, and four are now in custody for robberies committed during the New Year events.

Tensions have been high after 516 women claimed to have been the victims of sexual assaults and muggings on New Year's Eve.

It has been reported that the attacks were coordinated via social media.

The ordinarily moderate Deutsche Welle has run an opinion piece by a Pakistani journalist working in Germany who writes that Germans "feel increasingly threatened by a culture that is not compatible with their own."

As a Pakistani journalist working in Germany, I have been very skeptical about the German government's decision to allow thousands of refugees into the country without much scrutiny of their backgrounds.

...I was sure that the migrants' influx would ultimately disturb the harmony and balance of German society. I feel that Islamic culture and European norms are not compatible.

Most Germans have responded to the refugee crisis with exemplary humanism. My European friends got angry when I warned them against Chancellor Merkel's migrant-friendly policy. I found it very naïve that many Germans believed that all Middle Eastern and South Asian refugees would conform to their way of life and values. I told my friends that their understanding of the Muslim world was limited and flawed. They didn't pay much attention to my arguments.

...My worst fears came true when hundreds of young men allegedly from Middle Eastern and North African countries sexually assaulted German women in Cologne on New Year's Eve. Many say it was a pre-planned attack, as the Muslim men groped and touched the women's private parts shamelessly. And now the Germans are finally debating whether it was a good idea to be so open to embracing people from alien cultures.

...What happened in Cologne happens regularly in my homeland, Pakistan. The men are never ashamed, never feel guilty, never show remorse about the way they treat women in that part of the world.

The men who sexually harassed girls in Cologne were not demented; they knew what they were doing. And I am sure they did it with absolute contempt for the European culture, its norms and its people.

German society is changing, with right-wing Christian as well as Islamic groups getting stronger by the day. It is an alarming situation for the majority of secular people in Germany and Europe.

If the German government wants to protect the country's secular foundations, it must increase checks on the people it intends to integrate into its society. Integration is not only about learning the German language.

I know many Muslims who have been living in Germany for decades, speak fluent German, yet they harbor deep resentment against secularism and Western values.

The rise of Salafism in Germany has given more impetus to neo-Nazi movements in the country. Pegida is just one example.

What happened on New Year's Eve could change the way Germans live and treat foreigners forever. The government must make sure this doesn't happen.

Europe, to be fair, has a lousy record of integrating or assimilating its Arab and North African newcomers and there's plenty of blame to spread around and just about everyone, European and newcomer alike, deserves their share.

Will the Koln night of sexual assault leave a scar on Europe, a wedge between European and newcomers, that cannot heal? Bear in mind that the wave of migration that Europe experienced over the past year and a half is just the start. There are causes other than the Syrian civil war that will drive masses of people out of Africa and the Middle East seeking refuge in Europe. No one seems to imagine that Europe is even capable of absorbing the numbers that will soon be heading to its shores.

What is already underway is powerful fuel for the fires of rightwing nationalism of the sort that has brought such murderous misery to Europe and the rest of the world in the past. Could we be on the brink of another cataclysm of butchery?

UPDATE - Guess what's racing up the best sellers' list in Germany. You got it, Mein Kampf. It's selling like hotcakes.

Timothy Garton Ash writes in The Guardian how Poland's rightwing government is dismantling the pillars of democracy with attacks on the country's constitution, journalism and civil service.

A DIYguide to building an illiberal democracy.

Oh, great! Now this. Sweden's prime minister, Stefan Lofven, is criticizing Swedish police for covering up sexual assaults by "recent immigrants" at a 2014 music festival. And now reports are emerging of attacks on Swedish women in Malmo on New Year's Eve.

Europe will have to close ranks and close borders.

Germany made the mistake of allowing people to stream in without pre-screening. As near as I can tell, what they got was predominately angry men.

The Canadian government is wise to screen migrants before letting them in.

Equally wise to submit single men to a higher degree of scrutiny.


I understand your points but I'd like to know why we don't have these troubles in Canada. Is it because we allow fewer in (by percentage)? Do we somehow screen better? Does distance play a role?

Is it even feasible to accept migrants on the scale that Europe has accepted over the past couple of years? There must be some level at which the native culture isn't imperiled.

I suppose it would be better if the EU wasn't so riddled with its own organizational failures. I think Old Europe (and the rest of the world) might have been better off if they hadn't been in such a rush to swallow up Eastern Europe. There's some scary stuff going on in countries such as Hungary and, now, Poland.

To try to answer your question, I think that ghettoization can be a big problem. Encouraging community groups all over the country to sponsor immigrants (from any origin) helps to disperse them and give them time to accustom to life here.

As the world turns I expect there will be increasing demands on Canada to accept more immigrants faster and we may wind up with problems like Europe is facing.

Anyong said....Mound I'd like to think the reason we in Canada don't have the female sexual thing is, we don't take in huge numbers of refugees. I'm not racist, at least I think I'm not, at least here in Canada, we welcome refugees and that may make a lot of difference. The smaller number of refugees allows for better integration. Also, there isn't anything racist about thoroughly investigating those we allow into this country.

I agree, Anyong, that screening needn't be racist although it certainly can be and there's plenty of room for overlap. Screening is inherently discriminatory but it can be for legitimate or ulterior purposes.

I agree that the attitude to newcomers must have a deep and lasting impact on the migrants' view of their hosts and their willingness to assimilate. I suspect also the fact that Canada doesn't have readily crossable borders (save for the U.S.) and is so distant from most migrants' homeland has some bearing on integration.

@ Mound
So Tony Abbott's message to the Europeans (do not allow to get hoodwinked by bleeding liberal hearts & keep the door shut) was actually prescient.
And what is going on in countries such as Hungary and, now, Poland is just calling a spade a spade. Truth might be sometimes scary stuff.
@Toby
Visit Surrey and Richmond to see first hand how well (or not) integration is proceeding...
Miloš Zeman, President of the Czech Republic was ridiculed by stating that single able bodied men should be not allowed to seek refugee status in Europe, as THEY not us should fight for their cause in their homeland(s). Scary yes, truth? I think so.
A..non


I think there are better sources for that message than Tony Abbott, A..non. It's a difficult and complex problem that admits of no good answers. Abbott's 'let them drown' approach is not especially helpful even if it would be the least expensive.