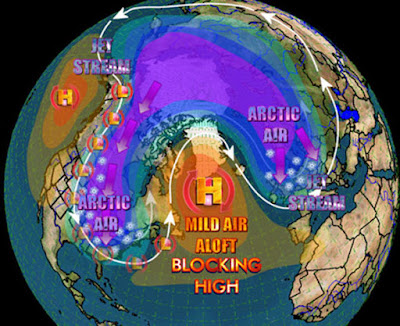 How do you cap off weeks of devastating flooding? How about a blast of Arctic air that'll bring you your coldest winter in 58-years? That's exactly what's heading for Britain and it'll hit the UK in just a couple of days. From the Daily Express:

Blistering Polar gales, several feet of snow and near-record low temperatures will grind the country to a standstill until MARCH, forecasters warn.

The first taste of what could be a historic whiteout will arrive THIS WEEKEND as freezing winds drive in from Siberia and the North Pole.

Britain is on alert for the week-long winter blast to unleash widespread heavy snow and -13C (8.6F) temperatures.

The bitter spell is forecast to last through next week bringing harsh frosts, snow and ice across the length and breadth of the UK.

It has sparked warnings to expect chaos on the roads while communities are urged to keep an eye on the elderly and vulnerable.

Flood-hit Scotland is braced for up to two feet of snow to plunge the region into more misery as the mercury nosedives to -10C.

Forecasters warn not to be fooled by a brief mild spell and that a lethal set of freak weather conditions merging to unleash winter CHAOS.

The graphic above indicates that western and central Canada and the American mid-west will also be getting hammered. It looks as though the west coast will be spared.
Posted by The Mound of Sound at 10:10 AM

I'm right in the middle of this!

It's interesting to me that I can't find a similarly dire warning anywhere else. Not The Met, not Accuweather (http://www.accuweather.com/en/weather-news/uk-coolest-weather-so-far-this-season-wintry-showers-snow/54674993), not weather.com/UK, not BBC weather, not Weather Underground.

Cooler yes, probably some snow in the north of Scotland, maybe some later on the north of England too but nothing as apocalyptic sounding as that report in the Daily Express.

I began hearing about this a couple of days ago, Dana.

Here are a few links I just found on Google:

Bad enough. I wonder what the variance in prediction is about.

And the bad weather is worse in the North Sea. It is getting a bit expensive for the fossil fuelers out there. Good!

Canadian Natural Resources (CNR) have announced, Thursday (Jan 7th), that one of their North Sea assets has also been hit by the weather

Back in 2011 the Banff FPSO suffered mooring failure, with 5 out of a total of 10 mooring lines failing, causing the vessels to drift off station at a cost of US$300 million.