I know, I know. It's only January. We just declared 2015 the hottest year in recorded history. It sounds a little premature to proclaim 2016 the new record holder with eleven months yet to go. The thing is the scientific community is pretty certain 2016 will break the old records and by a significant margin.

But don't erase record hot 2015 from memory just yet. In just another decade or so, 2015 will represent the new "normal." To put this in perspective, here's what 2015 looked like to NASA's Goddard Institute. White is normal temperature, blue is below normal. The rest, well you can draw your own conclusions. 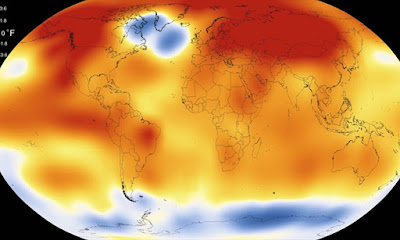 Over 90% of the energy trapped by the increased greenhouse effect goes into warming he oceans. A recent paper led by Peter Gleckler at Lawrence Livermore National Laboratory estimated that the oceans have been building up heat at a rate equivalent to 4 Hiroshima atomic bomb detonations per second since 1998. That’s over 2.3 billion atomic bomb detonations worth of heat building up in the oceans over the past 17 years.

During that time, the oceans accumulated as much heat as they did during the previous 130 years, with 2015 reaching record levels.

In fact, research by Kevin Trenberth and colleagues suggests even this is an underestimate, and that from 1992 to 2005 the oceans built up heat at a rate of 6 atomic bomb detonations per second. Trenberth believes many other studies have underestimated the rate at which the southern hemisphere oceans are warming.

"Previous estimates of ocean heat content change have been too conservative in the changes in the southern hemisphere. The absence of data does not mean absence of warming. Several estimates then use zero change in those regions. By better assessing what changes are likely in the no-data regions, based upon the regions where there are data, the ocean heat content changes increase."

Encouragingly, on average, climate models are nailing the increase in ocean heat content quite accurately.

there is no solar cycle that'll save you

there is no extra "carbon budget" to play with