I'm sorry, maybe it's just me. I'm a bit irked at how our prime minister, who seems to disappoint on the tough issues, never passes up a photo-op even when it comes to insinuating himself at a concert, perhaps the final concert, of a great Canadian band, the Tragically Hip.

Sure, the Hip's lead singer, Gord Downie, is dying of brain cancer. Sure this may be the band's final concert. That doesn't mean that prime minister Showboat can't stage an appearance, grab a bit of the limelight.

His staff posted the prime ministerial marquee days in advance. Justin Trudeau would be appearing at the Tragically Hip concert. And sure enough, there he was, surrounded by his security, cool as fuck. 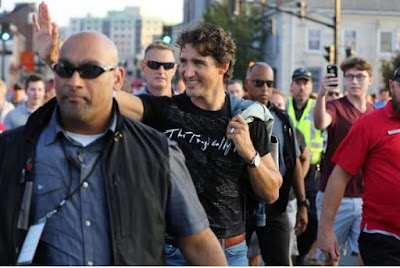 Narcissism seems to run pretty deep with world leaders and wannabes alike these days  - Erdogan, Trump, Trudeau. It's all "look'it me, loot'it me."

I just wish he did half as good a job at governing as he does at photo-ops.
Posted by The Mound of Sound at 12:22 AM

he is just too fucking cool for words isn't he?

I don't want to go too hard on the golden boy. He's doing what a celebrity pitchman is expected to do. Pretending to govern might subvert the messaging and would definitely expose product deficiencies.

You and the enlightened commenters at the National Post are now in agreement.

A long journey to the dark side. Well done!

No, NPoV, quite the contrary. Not being a tad nauseated at this is "going to the dark side." Check your tracks.

.. mm .. the Hip on CBC .. PM seen near the end, during Gord's off the cuff (no doubt rehearsed tho) props..
Aint gettin my arse in an uproar.. hardly surprising to see a hip PM catch the obvious scene
and obviously CBC had a camera well aquainted with the PM's location.. as was Gord Downie

The laugh for me is the contrast with the previous PM & his desultary coterie
championing Nicklewhack in his unique & unhip methodical stunningly studious way ..

All other comparisons aside..
Harper was 'contrived' personified... Trudeau 'gets it'

I personally don't give a flying f__k if young middle aged Trudeau does backflips naked on Long Beach
as long as there are ZERO Asian tankers scrambling along our western coastline..
.. and as an Easterner farm boy who worked in almost every province or territory
I want to know Canada's wild fisheries are defended to the hilt
.. that we are not turning Canada into a vast fracking pin cushion
to fuel Asian economies while trashing our environment and species..

As loud as I have been re the disgusting transgressions of Harper, Clark, Wall et al
I intend to be just as loud about failures of Trudeau junior to 'get' the big picture
You keep bangin the drum Mound.. never a doubt here, that you 'get it' ..

I didn't vote Liberal in the last election and, in the month or two that followed, I wondered if I had misjudged Justin Trudeau. That was the period when he was issuing all the right "mandate letters" and reversing Harper's gaffes on the census, the First Nations women enquiry and such. Then it turned out that he was merely picking the low-hanging fruit, the easy and showy issues.

When it comes to the tough stuff he's been largely AWOL. He promised to clean out the corrupt NEB but those industry shills still run the place and he's taken to backing them. C-51 - same, same. The Saudi death wagon deal - same, same. Bitumen and pipelines - Harper couldn't have done better. That promised tanker exclusion zone for the BC north coast - what tanker exclusion zone? Mandate letter? So what.

That climate change policy he promised to deliver within 6-months of taking office. Can't be doing that and pimping bitumen at the same time. On and on and on.

We thought we were getting a new deal but it turns out we've settled for Kid Go Along to Get Along.

It churned my stomach when Harper removed the portraits of former prime ministers and put up pictures of himself in their place. That was just plain cheesy. How is the Dauphin's amazing focus on photo-ops while neglecting - yes I said neglecting - the very serious challenges facing Canada one bit better?

Trudeau seems to be popping up everywhere Mound, parades, festivals, and now a musical concert.His advisors dictate what his policies will be, both domestic and global. They then send him off to commune with the masses.The Image of Trudeau as being approachable, open, a regular Mr. Congeniality is what is trying to be achieved here.

Image is everything. This is the change that Trudeau talked about in the last election. Not a change in policy or international relationships. Those remain the same as when Harper was PM. The change he talked about making,is simply a change in image.

Maybe our celebrity, attention seeking PM just wants Canadians to love him. In 2020 we will find out if we still have a free and sovereign nation. Let's see how visible he is then.

I fear you are all too right MoS, and Pam. I am still just sympathetic to Sal's perspective JT vs Harper but....

If Justin does not do the critical 180* turn on carbon energy projects and pipelines to address climate disaster well then it is all for naught and I would say it would be time to invert the red maple leaf again Mound.

Promises, promises but as you say on the big stuff so far total bamboozil and failure.