Canada's Energy Policy - Flying At the Speed of Stall. 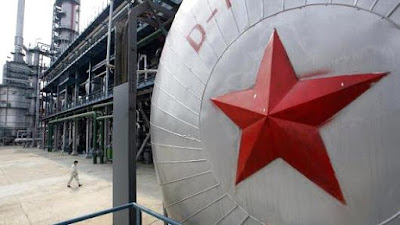 BC's Christy Clark had fantasies of massive tankers ferrying liquid natural gas to eager markets in Asia.  Every Alberta premier since Peter Lougheed and every recent Canadian prime minister has had similar wet dreams about vast wealth to be had for allowing foreigners to extract and export Athabasca bitumen. Surely China, wonderful China, was simply waiting to bury us in their mighty yuan.

Some of China's top oil refineries are having to take the highly unusual step of cutting operations during what is typically the peak demand summer season when hot weather drives up power usage and families take to the road during school holidays.

Almost 10 percent of China's refining capacity is set to be shut down during the third quarter, signaling that demand growth from the world's top crude importer is stuttering further.

West African and European suppliers are already feeling the chill from China's reduced demand, and a global glut has dragged spot prices for crude this week to their lowest since November, 2016.

Major Chinese oil refineries, including PetroChina's Jinzhou will set their run rates around 6,500 barrels per day (bpd) lower than the second quarter, sources at the affected refineries said.

Petrochina's Fushun refinery, with an annual capacity of 233,200 bpd, began a 45-day full shutdown at the start of June, the sources said on condition of anonymity as they are not authorized to speak to media.

Rival Sinopec is considering slashing as much as 230,000 bpd, equivalent to about 5 percent of its average daily production last year, in what would be only the second time in 16 years that the firm has cut runs.

Imagine Canada having to compete with China across the rest of Asia Pacific.

To whittle down the surplus weighing on the domestic market, analysts expect China to export refined product, putting more pressure on a well supplied global markets.

"China will have to export product... onto Asian markets, which given demand conditions regionally does not appear particularly constructive," said Harry Tchilinguirian, head of commodity strategy at French bank BNP Paribas.

Justin and his merry band of petro men and women ("What, me worry?") will not like this news at all, Mound.

.. there are so many 'known' facts and science (and basic biology) involved in this evolving story, Mound .. We here in Canada eh.. know via mainstream media and Ezra Levant that the Dilbit must get to Asia so our economy 'gets driven' & there are jobs jobs jobs.. some of which may go to Temporary Foreign Workers.. The fast food joints to feed the maw of all these jobs jobs jobs workers, will also be TMP's as no white person would work for min wage & zero benefits.

Oh I forgot.. Site C - or soon to be Lake Past The Point of No Return & The Christy Clark Memorial Dam.. yes there's plans afoot for LNG supertankers, from Asia dontcha know? And who knows, maybe bales of medical marijuana from BC can accompany the last of BC's old growth forests can be scooted off to Asia & come back as souvenir matches or pennants of English Bay.. or as plaques showing what grizzlies, caribou, wild salmon, Orca & polar bears looked like before extirpation was applied as a 'nation building' farce

Meanwhile.. over in Asia ...the water, the aquifers are running out, the soil is contaminated, the sun don't shine due to pollution.. and the rural population is heading to the major cities to try and survive.. Halleluja eh... drill baby drill ..

Events in the Mid East may foretel changes in the world energy market. With Saudi Arabia threatening Quatar one suspects the House of Saud wants to monopolize LPG exports from the area. American demands for sanction on Russia could threaten Nordstream force Europe to buy American. Germany and France have told Trump to jump . Interesting times.