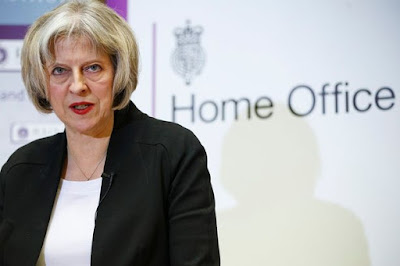 In today's editorial, The Guardian is calling on prime minister Theresa May to rescind her state visit invitation to Donald Trump.


Mrs May had no good answer when asked whether the police cuts have undermined counter-terrorism. She refused to be drawn into condemning Donald Trump’s shameful criticism of London’s mayor, Sadiq Khan, whose response to the weekend’s attack has been exemplary.

Unlike other world leaders, Mrs May has made an art of avoiding public confrontation with the US president. But – in the words of her initial response to the London Bridge attack – enough is enough. She should make clear to Mr Trump how offensive and unhelpful his extraordinary intervention was, and rescind the invitation that has been extended to him for a state visit later this year.

With Britain's general elections just days away, The Guardian criticized May for slashing funding for police services and prison staff.

On policing, Mrs May has stressed that the most critical question is whether the police have the right powers, not numbers or resources, to combat terrorism. How convenient. Since she became home secretary in 2010, the number of frontline officers has fallen by almost 20,000, and the number of firearms officers by more than a thousand. These were not cuts reluctantly overseen by Mrs May; on the contrary, she enthusiastically embraced them, accusing the Police Federation of “crying wolf”about their impacts on frontline policing.

The immediate police response – and the heroism of officers at the frontline – is by far the most visible aspect of the police’s role in counter-terrorism. But no less important is the invisible role of neighbourhood policing in intelligence-gathering. Police officers on the regular beat can build up trusted relationships within the community they serve, acting as its eyes and ears. Cuts to police numbers cannot but impact on the capability of the police to fulfil this vital role. But days before a general election, Mrs May sticks to her line that they are not a problem, thus appearing to put her embattled personal reputation before national security.

Policing is not the only area in which austerity risks our security. The number of prison officers has fallen by a third since 2010, and many prisons are now operating at 150% of capacity. Prisons have not only become far more dangerous places as a result, with violence and drug-dealing increasingly common. They have also become schools for Islamist extremists, and prison governors lack the resources and the capability to respond. This makes a nonsense of the prime minister’s suggestion of longer sentences for those convicted of terrorist offences. Without investing significant resources into prisons, this could be entirely counterproductive.

I'm guessing that The Guardian will be endorsing Jeremy Corbyn and Labour in the elections. Veteran columnist, Polly Toynbee, says Britain will be better off without May.

Remember, she chose to put herself through this election. Soaring 20 points ahead, she broke her word to grab the chance of a landslide.
...
The fearsome terror attacks of recent weeks might have been expected to rally people round their leader, but instead they leave her challenged. Why did she cut 20,000 police and reduce the firearms force at a time of rising risk? No use now calling for draconian powers or tougher sentences when she neither demanded them in the Home Office nor put them in her manifesto.

These “do something” gestures come without the nobler thoughts a leader needs to summon at a time of national heartbreak. “Enough is enough” is as inept and vacuous a response as “Brexit means Brexit”. Of course she is not to blame for outrages so fiendishly hard to prevent, but she can’t pin it on “far too much tolerance of extremism” either. What tolerance? Hers in those Home Office years? Might she be over-tolerant of the Saudis, in refusing to publish a report into their sponsorship of Wahhabist extremism, and overeager to visit them to sell arms?

Just came back from the UK and France.
Theresa May is popular because she does not like brown people.
She also does not like poor people or those that don't like fox hunting.

I think PM May has spent too much time close to Trump. She has even touched the guy! It's a virus.

The "reducing policing" thing is no doubt somewhat relevant. But when it comes to the Manchester bomber, what is more relevant is that British intelligence knew all about the guy, knew he was dangerous, had in fact for years aided and abetted a group of Manchester terrorist types including the Manchester bomber's father, who they had sent to Libya to fight a few years previously (when Mrs. May was Home Secretary and so theoretically in charge of MI5). It is blazingly obvious that if you cultivate violent extremists who hate you in hopes of using them to commit violence, they may commit violence against you.
https://www.counterpunch.org/2017/05/29/no-laughing-matter-the-manchester-bomber-is-the-spawn-of-hillary-and-baracks-excellent-libyan-adventure/

If she didn't know about this she was incompetent. If she did, she was culpable. It is a sign of just how putrid the media is that this woman can even be considered a prime ministerial candidate at this time.

So much for May decimating any opposition.
That she would wish to have no opposition is repulsive at best.
So much for democratic UK.
Politics overshadowed governance.

Fortunately the plan backfired.
I can only hope the fox hunting bitch will soon be history.