This Won't Set Well With the Donald 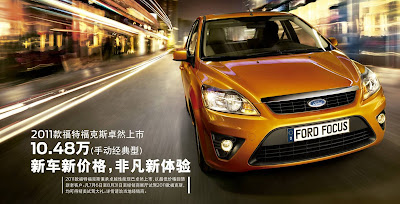 Who can forget the glory days when Donald Trump bragged about putting the kibosh on plans by Ford to build its Focus compact cars in Mexico? He sure straightened them out, didn't he - pilgrim?

The Ford Focus will not be built in Mexico. It will be built in China and those compact cars will then be sold in the United States of Murca.

Ford already makes some Focus cars in China, but starting in 2019, Ford Focus cars sold in North America will be made there, too. It will mark the first time the automaker will make cars in China and export them back to the United States.

After the switch is completed, China will produce most of the company's Focuses, with some coming from Europe as well.

The move will save the car company $1 billion US, including $500 million from cancelling a new plant in Mexico that was intended to build the Focus.

But who can forget this, Trump the Jyna-Slayer:

“I beat the people from China. I win against China. You can win against China if you’re smart. But our people don’t have a clue. We give state dinners to the heads of China. I said why are you doing state dinners for them? They’re ripping us left and right. Just take them to McDonald’s and go back to the negotiating table,” Trump said in July 2015.
Posted by The Mound of Sound at 8:19 AM

The Gullibillies will still see this is some sort of success because Mexico didn't get the Ford plant.

His comment about McDonald's was before he figured out how to loot the US treasury by serving Chinese leaders "beautiful" chocolate while sitting on cheap banquet hall chairs at his Mar-a-Lago resort.

What's the problem? The 35% levied on the cars from China can be taken into account in the reform package to offset another tax break for the job creators. This is all about winning, you know.

"The Ford decision shows how flexible multinational companies are in terms of geography. I believe that as President Trump's policies and reforms take hold, more companies will begin to locate their facilities in the U.S. as several German and Japanese automakers already have."

So just relax and remain flexible. It would be unhealthy to become overwrought when you're about to become sick of winning. But maybe somebody should check with Wilbur about when those German and Japanese things happened.