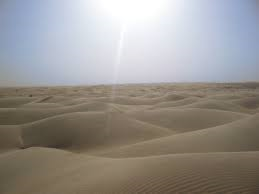 The Sahara desert is about the driest spot in the world.  It wasn't always that way.  It wasn't always a desert.  About 10,000 years ago it looked like the grasslands of other parts of Africa today.  Then it changed and new research from the Horn of Africa shows it likely changed in a geological heartbeat.  It should be a warning to us all.

What the scientists found was that, far from shifting gradually from wet to dry, the climate in the Horn of Africa changed in perhaps as little as 100 to 200 years, incredibly quickly in geological terms. The reason north Africa warmed up, they believe, was a cyclic change in Earth’s orientation toward the sun (called precession) which caused more sunlight to fall during the Northern Hemisphere's summer. But the precession cycle is slow, taking 23,000 years to complete. So why was the changeover in the Horn of Africa so quick?

“It shows something really surprising,” says [Columbia University geologist Peter]  deMenocal. “It’s evidence that climate doesn’t respond gradually to gradual forcing. It would be wonderful in global warming if everything just kept pace with the gradual rise in CO2, then we could plan for this, we would know what is going to happen, there would be some predictability in it."

But what researchers like Tierney and deMenocal are increasingly finding is that climate doesn’t change in a linear fashion, but suddenly and seemingly unpredictably. That’s because there are positive feedback mechanisms that start to kick in and speed things up. For example, when the Arctic sea ice melts, as it has increasingly in recent years, the area of dark blue heat-absorbing ocean increases, raising temperatures, melting more ice, which in turn raises temperatures still further in an snowballing process.

There are among us plenty of people who think that a few degrees of warming would be just dandy.  More golfing in February sort of thing.   These types assume we can warm without destabilizing the climate with potentially very dangerous consequences.  And, yes, these climatic triggers are measured in parts per million.  Anyone who doubts that should read Peter Ward's "Under a Green Sky" and look at the latest numbers on ocean warming and acidification.  That might just jolt you out of your complacency.
Posted by The Mound of Sound at 9:10 AM