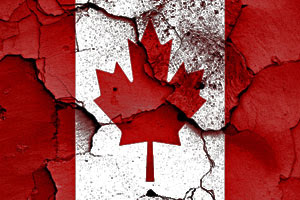 69 per cent of Canadians polled say that Canada is broken.

In a time of widespread disagreement and ever-increasing polarization, there remains a bitter solidarity among Canadians in the belief that the government doesn’t know what it’s doing.

In the wake of regional discontent from the western provinces and blockades jamming up the country’s rail network, a towering majority of Canadians agree with the statement, “Right now, Canada is broken.”

Sixty-nine per cent of Canadians agree with the statement, rising to 83% in Alberta, found a DART & Maru/Blue poll conducted for the National Post.

The poll spells bad news for Justin Trudeau with a majority of people believing that the country is not headed in the right direction and that the prime minister is not governing well. The Liberals also get most of the blame for the rail blockades.

And on Trudeau’s signature promise to help Indigenous people, two-thirds of Canadians don’t believe he has delivered on that pledge.

“A lot of the blame has been centred on the prime minister and the Liberal government,” said Daniel Béland, the director of the McGill Institute for the Study of Canada.

Politicians, though, get much worse reviews. Provincial premiers get a 45 per cent approval rating, Conservative leader Andrew Scheer gets 36 per cent approval, and only 27 per cent of Canadians think Trudeau has handled the situation well.

...More than 80 per cent of Canadians believe their politicians care more about their own partisan interests than working on behalf of all Canadians. The highest level of agreement on this came from Alberta, at 90 per cent, and Atlantic Canada, at 86 per cent.

[Dart pollster John] Wright said the issue of increasing partisanship and polarization is one that worries him.

“People are truly frustrated with the inability of their leadership to come together and recognize that human beings are being affected by their decisions and that they’re not simply voters,” said Wright.

The problem with this poll is that it almost guarantees the outcome, the piling-on of the prime minister. Yes, we've become a deeply divided society. Isn't that an occurrence common to former liberal democracies beset by the corrosive nature of neoliberalism? Is Britain not a divided society? Is Germany not divided? Is Bolsonaro universally loved across Brazil? What are we to make of the United States whose people are more angrily divided and distrustful than at any time since the Civil War?

Have the Tories been a force for nurturing social cohesion in Canada? Absolutely not. Stoking division and rancor is their stock in trade. Movement conservatism is fueled by this sort of division. But you will never hear that in the pages of PostMedia because they're in league with the Conservatives and openly supportive of the petro-state.  They're right in claiming that Canada is broken. They wouldn't have it any other way.

Before we leave the subject of our ailing democracy, how about a First Nations take on the same subject? Matthew Norris is a member of the Lac La Ronge band and currently a PhD candidate at UBC. He too sees a crumbling legitimacy of Canadian democracy only his take is different. It's a worthwhile read, deserving of ten minutes of your time.

I call TOTAL BULLSHIT on this poll. Not a single link to the poll in the article? What were the questions? What type of poll was it? Another full-of-crap online poll? What is the National Post trying to hide?

Wait a second. You're an Anonymouse. You can't call "TOTAL BULLSHIT" on anything. You're anonymous, a meaningless expression of anything. However, as you're plainly so exorcised here's a lovely rebuttal from Macleans that should calm you down.

There, is that better?

The National Post have been championing Alberta separation ever since they made their deal to promote Canadain energy companies.
They have done more to divide Canada than any politician.
Resource extraction and who ownes the rights of (particularly oil) is at the heart the phoney debacle.

Many in the current crop of failures didn't even attend the Mike Harris School of Creative Divisiveness. There must have been more of these hallowed institutions than I thought. I suppose they recognize each other's credits.

John, I think the dismantling of a cohesive Canadian society has been something of a work in progress for the Conservatives going back to the Manning/Harper era. They first divided the PC ranks, breaking off to establish Reform. Then they kept the PCs weak until they were able to put it down and takeover. Once they had control of the right they set about to drive a wedge through Canadian society. None of this has been inadvertent.

.. The premise really truly p's me off.. The 'Canada is broken' carping, polling, propaganda premise. In my view there are truly serious issues being perpetrated by our Political Parties and I prefer right now to cherry pick re the constant sick 'contraryism' from 'conservative' - Federally and of course Provincially.

I have no problem pointing to Trudeau & Horgan Inc sleazing in regard to Aboriginal Title being intentionally infringed upon, on behalf of BIG ENERGY. My question is what could we expect if the 'conservatives' gain power ? Let's say a minority Government via a non confidence vote bolstered by NDP or other.. who knows. It would be ugly to say the least. At the same time, it is ugly under the Liberals & Trudeau. its sickening what I see in BC currently as well as Federally.. Hell, its sickening across the board, aside from Green and the Bloc

I commented on this already, at Northern Reflection today. Presenting the analogy of how the forces against First Nations & Aboriginal Title are essentially hoping to win, enforce or grift a kind of 'Reverse Mortgage' make believe 'Treaty' with the Wet'suwet'en Peoples. Governments are captured obviously. as are any major Political Party, but the 'blame game' of Scheer and Kenney et al is simply 'attack politics' without a care in the world otherwise. Watching them take advantage of the current status quo is disgusting. Sure the Liberals deserve every harsh criticism.. as do Horgan's NDP.. but its sheet opportunism pouring out of the 'conservatives' currently. In no way is it responsible or coherent and on behalf of Canadians.. and the federal NDP sleazed out a joint statement with the 'conservatives' today, to that end.

Taken the Alberta Fair Deal questionnaire yet? It's an official Alberta thing, not some newspaper poll.

kenney propagates the harper line of abject nonsense with no pretence of being fair himself. It's a biased poll for prairie armpit scratchers who feel hard done by. One question/option is about Wexiting along with all the West, which BC will love, since they weren't asked.

As we all know, Alberta has been badly treated by the rest of us for since whenever! Yes indeed.

Alberta ain't asking for a special deal, nosirree, they just want a fair deal, like more say in Ottawa. Than anyone else. Proportionately. That's not special, it's just fair, dontcha know.

I filled the questionnaire in. It's a few unabashedly leading questions. They have no way to check where you're at other than going through every device URL. And there's even space for comments. Oh joy. I had fun.

The divisions in this country have been stoked by the left and liberals far more than the right. Thomas Munlcair earned votes in Quebec by creating a ridiculous Boogeyman out of pipelines. Countless liberal governments have failed to constructively or meaningfully engage the west. For the liberals this failure does not originate from an ideological incompatibility but out of political calculus. There has never been a "cohesive society" in Canada due to massive regional imbalances and divergent regional interests. There never will be a cohesive society until a party comes up with a better strategy than hindering the energy and resource based economies of the west. Ironic that progressives reject supply side economics yet some how think constraining supply will curb demand for oil. Also using the word Petro-state is a sure way of identifying yourself as energy illiterate.

I stumbled across a good one today:

You know how your parents used to call every console a "Nintendo"?

That's how conservatives use the work "liberal" to describe everything to the left of hunting the homeless for sport.

Paul, I don't know how far back you go but when I was a journalist in Ottawa I was always astonished at how conservatives played the east/west game. They quite shamelessly said one thing in Quebec and something entirely different in the West. So, please, take your crap somewhere else.

Do you always give such unsubstantial replies and then demand people take their crap elsewhere? Perhaps you should go back into journalism because you would be right at home in a field that is filled with people that know nothing about anything important (do you think 1/100 or 1/1000 could tell me the difference between a Watt and Joule on the spot), make baseless claims, and who think activism comes before truth.

Paul, I'm going to respond one last time. Truth? How much of that do you get out of the likes of Kenney, Moe, Ford or that part-time, summer-help insurance clerk? That's your idea of truth? As I said, shop your nonsense somewhere else. Just take off.

.. the author & newspaper publishing that article and the pollster seem one with the program, mebbe even golf with each other. As far as the blame game.. the key for me is, the poll & graphics forgot the most crucial aspect and full partner ! That blame game graphic with the round circle pie chart for example.. does not include the pipeline ! Its as if the pipeline is not front and center, just an abstract ? What happened ? A Parliamentary Pardon In Advance ? Folks.. the poll and article are sheer propaganda.. partisan ? I dunno, probably & intensely, & just another PostMedia pimpage favour for Big Energy.. mutual backscratching so to speak, being out there.. But in reality, Its The Medium Is The Poll is The Message - misunderstood... no, misused.. even abused

So the poll is garbage, gamed crafty design, poll garbage, blah blah
Why ?
There's no share of the 'blame' score, nor mention of..
TC Energy & Coastal GasLink
Funny, I was sure the BC Government insisted they do
the informing, consulting, engaging and negotiation
You know.. the secret Benefits Agreements
with Tribal Chiefs & Band Councils
and the facts and chronology since are easily found

The public only hear about this stuff via TV, Radio, Web, Twitter etc
which is exacly where the Grooming Message is distributed

"The grooming message" indeed, Sal. Why inform when you can as easily indoctrinate?