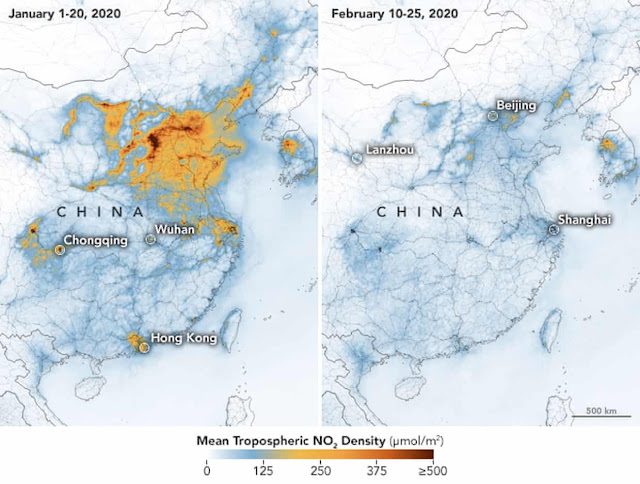 There's more to this virus than health problems. As the New York Times explains, Covid-19 could easily become a global economy wrecker.

The globalism spawned by the neoliberal order has inflicted some grave economic vulnerabilities on most countries. We become dependent on long supply chains and "just in time" delivery. That requires a high level of stability in every country in the chain. One country goes down and the chain can be broken and, if that happens, it can take a long time to fix. A Dell computer is said to be dependent on the timely supply of components from upwards of 30 countries. One of them goes down and the whole thing stops.   In May of 2018, Ford was forced to stop production of its best-selling F-150 pickup truck when a fire gutted a supplier's plant.


The May 2 explosion and fire at the Chinese-owned Meridian Magnesium Products plant in Eaton Rapids, Mich., disrupted output for Ford and several other automakers, including General Motors Co., Fiat Chrysler Automobiles NV and Daimler AG’s Mercedes-Benz.

The pain has been felt most acutely at Ford, since F-Series generates most of the company’s profit. The company had shut down F-150 assembly at the plants in Dearborn and near Kansas City and also stopped building bigger Super Duty pickups at a factory in Louisville.

F-Series is the top-selling vehicle line in America, hauling in about $40 billion in annual revenue. Morgan Stanley values the franchise as worth more than the entire company.

The NYT article reveals there's not a lot Washington can do to avert a recession.


Interest rate cuts by the Federal Reserve — which appeared more likely Friday after a late-afternoon statement by its chairman, Jerome Powell — can lower borrowing costs and raise stock prices. But they can’t replace the goods made by factories closed to keep their workers from getting sick with Covid-19, the serious respiratory illness the virus causes. The government can try to pump more money into people’s pockets directly, such as with tax rebates, but money alone won’t put goods on empty store shelves.

If a potential coronavirus downturn were a fire, the recession-fighters would be like a fire brigade low on supplies, fighting among themselves, and probably lacking the right chemicals to quench the flames anyway.

“I’m looking at the combination of fiscal and monetary policy as potential triage,” said Joseph Brusuelas, chief economist at the accounting firm RSM. “All they can do is really mitigate the shock of supply chains and reduce the second-order effects.”

The core of the economic problem emerging from coronavirus is a “supply shock,” meaning a reduction in the economy’s capacity to make things. Companies in China that have shut down because their workers are quarantined are not making goods. That could eventually mean shortages of certain items for which there are few sources of elsewhere in the world.

Multinational companies typically operate complex supply chains, with lean inventories and essential merchandise that often arrives just in the nick of time. That means American companies that rely heavily on Chinese suppliers might begin facing shortages of key goods in the weeks ahead, said Nada Sanders, professor of supply chain management at Northeastern Univ“I believe we’re going to have a massive shortage of goods,” she said. “Two weeks ago I told people this was coming. The big problem was economists don’t understand how global supply chains work, how intertwined and interconnected they are.” It is an issue she said would particularly affect pharmaceuticals and electronics.

But supply problems can bleed into demand problems, and vice versa.

“If first the store is empty of products, and then people don’t go to the store anymore and they lose their jobs, they can’t buy anything,” Ms. Sinclair said. “That’s what we’re risking here.”

In parts of Italy, for example, where outbreaks of the virus have disrupted daily life, tourism is slowing and restaurants and stores are reportedly empty as people seek to avoid exposure. That could result in waiters and store clerks who endure a drop in income, which could in turn feed back into less demand for all sorts of products, and a weaker economy.

Similarly, businesses might go bankrupt if the financial markets freeze up and they cannot get access to credit, meaning otherwise sound businesses end up laying off employees or closing down.

The role for economic policy, in that sense, wouldn’t be to solve the supply shock, but to try to prevent that initial supply shock from triggering a demand shock.

...“There are a lot of reasons to think we don’t have a lot of tools for this,” Ms. Sinclair said. “It’s more of a supply-side issue, and we can’t do a whole lot to stimulate supply. And if it does trickle over into demand, it will be a real test of whether the Fed has any firepower left and whether we have appetite for the kind of fiscal stimulus that’s actually impactful.”

In other words, it would be best if the public health efforts to contain the spread of the virus are effective enough that we don’t have to ask very much of the economic firefighters.

For those who think this is a hoax, the image above shows satellite images of greenhouse gas emissions over China. The first is pre-Covid 19. The second is recent. China's industrial triangle has ground to a halt. The skies are clear. That reflects production that has been disrupted which means knock-on disruption through the supply chain.

Not only consumer goods will be affected but food production could suffer the same fate!
The possibilities are endless.

Absolutely, TB. We can only guess how this might unfold. I always thought that it would be climate change that put globalism out of its misery. This virus might just get there first.

I'm no doctor. All I know is what I read in the funny papers.

OECD is concerned that the world economy may only grow by as little as 1.5% in 2020, due to the virus.

That sort of slow-down will probably be more disruptive because we have so little control over it. There's really not a lot for us to manage. Our institutions and trade arrangements are not designed to accommodate something like a pandemic. If nothing else, Hugh, it could remind us how badly we have neglected resilience and adaptation.

The science types have been warning us in recent years to prepare for a "cascade" in which we're forced to cope with a number of climate change impacts that hit simultaneously.That sort of preparation costs money, something hard to find in our era of "everyday low taxes."