Has the Pentagon Met Its Match? 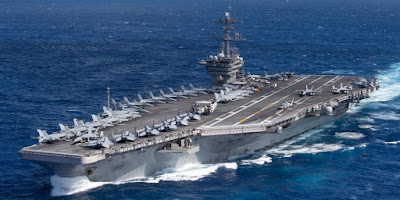 The pride of the US Navy are its fleet carriers - massive, nuclear powered, nuclear armed aircraft carriers that have for decades been a critical asset for "force projection" around the world. They have been a powerful instrument for imposing America's will on problem states.

One of these supercarriers, the USS Theodore Roosevelt, is now sitting at the dock in Guam as the Covid-19 virus spreads through the crew of 4,000.


In a four-page letter, first reported by The San Francisco Chronicle Tuesday, Capt. Brett E. Crozier of the U.S.S. Theodore Roosevelt laid out the dire situation unfolding aboard the warship, with more than 4,000 crew members, and what he said were the Navy’s failures to provide him with the proper resources to combat the virus by moving sailors off the vessel.

“We are not at war,” Captain Crozier wrote. “Sailors do not need to die. If we do not act now, we are failing to properly take care of our most trusted asset — our sailors.”

The problem is that Guam lacks the facilities and resources to quarantine 4,000 sailors nor the equipment and personnel to board the Roosevelt and disinfect the ship's spaces.

And what of the rest of America's armed forces?


The crisis aboard the Roosevelt played out like a slow-moving disaster and highlights the dangers to the Pentagon if the coronavirus manages to infiltrate some of its most important assets, such as bomber fleets, elite Special Operations units and the talisman of American military power, aircraft carriers.

At its core, the issue on the Roosevelt, and other warships, stems from the near impossibility of putting adequate social distance between people to stop the spread of the illness. Living quarters, hallways and doorways are cramped. Bathrooms and cafeterias are shared areas.

In his letter, Captain Crozier clearly outlined the challenge. “None of the berthing aboard a warship is appropriate for quarantine or isolation,” he wrote.

Military bases, by their very nature, are incompatible with social distancing or isolation. Barracks are not designed with distancing in mind. People cluster together whether in mess halls and hangars or in tanks or at sea.  Their proximity and mobility are  essential to their effectiveness.

Decades ago the most feared contagion was meningitis. Now, it seems, there's a new contagion.

A couple of Russian nuclear subs and a Dutch one are also under quarantine due to Covid-19. Viruses don't discriminate.


Very interesting, Cap. Militaries are militaries, unintended petri dishes for all manner of bacterial and viral contagions. Thanks for the link.

Has the Pentagon met its match?

The pentagon has lost most of its fights since WWII.
And always beaten by the little guy!
Vietnam, Korea, Afghanistan . and now Iraq.
Now it loses to the most miniscule of enemies.

There is talk of a reset of values after Covid19.
Those values include the distribution of wealth, military spending, health care and the value of big government.
This well may happen in many parts of the world , including Canada.
The USA and the UK and their special relationship which is code for financial interests; will likely carry on as usual and disappear into the sunset.

There is no shortage of op-eds these days proclaiming that we can never go back. A new order must emerge from Covid-19, one that erases all the flaws of neoliberalism. Most then lay out a future that varies, sometimes widely, from one to the next.

None that I have read has convincingly shown this magical path. We're not going to awake one morning to find that all the rules have changed and the Earth has become one. The pandemic is a powerful force but where are the signs, the precursors that would point to the change these prophets imagine?

My take is that once the contagion has passed, we'll be so eager to flock back to restaurants and movie theatres and the mall that we'll greet a return to the "normal" and quickly enough lose any appetite for the difficult and uncomfortable process of building a new world.

we'll be so eager to flock back to restaurants and movie theatres and the mall that we'll greet a return to the "normal" and quickly enough lose any...

The masses no matter what they wish do not control the narrative.
It's easy to steer people back to the norm when you hold the reins and we know who they are that hold control!

.. the marine or naval terroir is a fine port to sally forth from. Master & Commander the Fake President is not. A babbling windbag cannot be mistaken for 'fair winds' or favorable tide. All I see currently is a rudderless plague ship adrift to our south. Perhaps Fake President can direct any remaining hospital ship to go the the aid of USS Theodore Roosevelt .. not enuff beds in Guam.. I recall him nattering inanities a while back.. re one Chinese out of China.. and he was in total control.. like a miracle he would summon..

The twisted suckhole aint qualified to peel potatoes aboard.. but he's the Supreme Commander ?????

Since "snitches get stitches" is SOP in the Trump regime, it should come as no surprise that the Roosevelt's captain is being relieved of his command. He did the right thing by putting the safety of his sailors and aircrew first. It's a pity that his superiors are entirely without honour.

.. early on in a comment to you.. I suggested the disarray would be so anstonishing with Trump et al on one side and the military on the other.. internally. And that the Joint Chiefs would find the situation simply unacceptable. That they would step up and step forward.. or step back unanimously.. but somehow make it very clear.. that the political foppery was simply unacceptable. Was I ever wrong.

I often mention that when a single US Marine refuses to salute Trump.. or refused to end the salute.. or turned his back.. that would be the sign. To think the skipper of that carrier is not incredibly aware of Trump's lies and idiocy in regard to Covid-19 is preposterous. Anyone who understands naval ops and the astonishing procedural meshing of all departments aboard knows the rare level a carrier skipper must attain for such a command & what comes next after such service. Skippers like this are over achievers of the highest level. It would astound me if he dkes not have advanced degrees in nuclear engineering or the like.. He commands likely candidates for NASA's astronaut program and his senior officer cadre are the elite of the military elite. These are men with the nuclear codes and a key.. just like the skipper of a boomer or a missile cruiser.

Yet somehow, America is now elevating failed characters.. distorted evangelicals such as William Barr. America elected a President who consorted with Epstein, who brought his daughter and son in law into The White House and gave them Top Secret Clearance. The political contagious scummery is on the level of Covid-19 currently.. And to a certain extent 1/2 of Americans voted him in and will vote to keep him there. Do I fear for Canada ? For Canadians.. ? I see things now like a Wisonsin farm lad, who's father went to war.. and somehow rabies has infected some of the cattle in our barn.. and those of our neighbors.. its that grim a situation, and lawless thieves and killers are roaming the backroads

No military exemplar will refuse to assume command of that carrier. They will resign first. I try to imagine Robert Mueller and his former watching this unfold.. like Nixon deja vu times 25. Seeing the 'Spiritual Advisor' Trump ensconsed in his The White Hole as he huddles on the phone with Sean Hannity says it all.

Did you ever watch Breaker Morant, Mound ?
Its among my personal Top 10 films
It gets to the truly gutting conundrum of your topic..

Yeah, Cap, I was expecting he'd be sacked. It was pretty audacious of the guy but I'm sure there's more to it than that one letter. Anyone who has held a commission knows that was professional seppuku. Getting relieved from command of a fleet carrier isn't something he would have brought down on his own head without deliberation.

My take is that he felt he couldn't resign in protest, not while the ship and crew were in Guam. He must have been told to tough it out or something along those lines. And so he forced them to give him the hook and send a replacement PDQ. His career is finished but he leaves the Pentagon on the hook and I expect the public won't back the Navy on this one.

Today's military, and especially America's, is more politicized than in the past. Former US Army commander turned author and academic, Andrew Bacevich, has an excellent look at this in his book, "The New American Militarism."

Sal, this was an inspiring act of conscience and honour for the commander of a fleet carrier to put his crew over his own career. It's a tradition that hasn't aged well during the postwar era that has seen political calculus become embedded in the officer class.

As I mentioned in my comment to Cap, I expect this guy decided he couldn't quietly resign in protest and leave his ship and crew stuck in the middle of the Pacific. He forced the Pentagon's hand knowing it meant the end of his career.

Yes, I have watched Breaker Morant. I saw it with an Australian buddy at a theatre in Vancouver.