Once Upon a Time, Chapters 9 (Viet Nam) and 14 (Afghanistan) 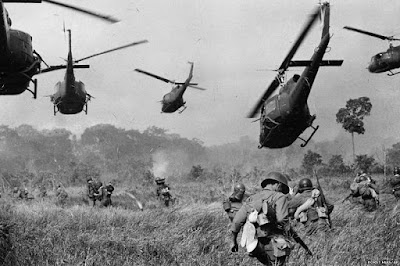 I was listening to the BBC World Service podcast this morning. They had a brief interview with some anodyne retired US Army general, one of many now forgotten names who had done a stint commanding American and ISAF forces in Afghanistan. He was questioned about the new peace deal struck between Washington and the Taliban.

The official White House line is that this marks an American victory over the Talibs. Even Pompeo says that with a straight face, not a trace of hilarity on his visage.  The BBC's talking head general was a bit more restrained. He said it was a victory for Afghan women. Apparently they now have rights that will persist into the future in some form, maybe.

The interviewer struck a raw nerve when he mentioned the Taliban were also declaring victory whereupon the cookie cutter general said they had better not because America wouldn't tolerate that. Really. America stood ready to return and restart the war if the Talibs got out of line. Yeah, sure.

Like all fairy tales this war begins with 'once upon a time' - 1973 - in a distant land, Paris. Two dudes met there - Henry Kissinger, on behalf of the United States, and Le Duc Tho on behalf of the Peoples Republic of Viet Nam, a.k.a. North Vietnam.

For more than a decade American forces had been fighting a fairly bloody war to check the spread of Communism in Southeast Asia by propping up a series of puppet governments in South Viet Nam. They had tried and tried but never got very far.  The Communist's supply of soldiers seemed inexhaustible even as America dropped more bombs than in World War II. That's 7,662,000 tons of bombs and that's a lot. Laos wasn't even a combatant yet it received, on average, 8 bombs per minute from 1964 to 1973. But I digress.

After dropping all these bombs wherever they could find a place to drop bombs and still not getting anywhere with Hanoi, the Americans started to think they were neck deep in a shit show so they convened a sit down that resulted in a peace deal called the Paris Peace Accord.  A curious aspect of the accord is that it was negotiated and agreed by just the United States and the government of North Viet Nam. The other government, the Saigon regime of South Viet Nam, wasn't at the table. It was there in spirit only, I suppose. The Nobel Prize committee only handed out two Peace Prizes for that - to Henry Kissinger and Le Duc Tho (Comrade Tho declined).

Then, deal in hand, the US delegation went back to Saigon to present them the accord as a fait accompli. For appearances sake the US pretended the South was in on it, but they weren't. Washington tried to pretend it secured peace for the South, but it didn't. The truth came out via the White House tapes Nixon was forced to cough up to the Special Prosecutor during Watergate.

The president of South Vietnam, in whose defense more than 50,000 Americans gave their lives, wept upon hearing President Richard Nixon's proposed settlement terms. ...Nixon would leave North Vietnamese troops occupying and controlling much of the South, while withdrawing all remaining American ground forces. "It is only an agonizing solution," said President Nguyen Van Thieu, "and sooner or later the government will crumble." National Security Adviser Henry A. Kissinger reported Thieu's response to Nixon on October 6, 1972, adding, "I also think that Thieu is right, that our terms will eventually destroy him."

As schoolchildren are taught, Nixon promised America "peace with honor" via a strategy of "Vietnamization" and negotiation. Vietnamization, he said, would train and equip the South Vietnamese to defend themselves without American troops. He realized it wouldn't. "South Vietnam probably can never even survive anyway," the president said on tape.

This was no mere passing doubt. On his first full day in office, he'd asked military, diplomatic and intelligence officials how soon the South would be able to handle the Communists on its own. The answer was unanimous: never. The Joint Chiefs, CIA, Pentagon, State Department, and the U.S. military commander in Vietnam, General Creighton W. Abrams, all agreed that Saigon, "even when fully modernized," would not survive "without U.S. combat support in the form of air, helicopters, artillery, logistics and major ground forces."

Okay, with that background in mind, let's flash forward to 2020, yesterday when the United States and the Taliban signed another 'peace with honor' agreement for US forces to di di mau out of Afghanistan.

You know the adage that 'victory has a thousand fathers but defeat is an orphan'? Yeah, that one. See?

What's the lesson here? There are so many. One is that America can win battles but unless the US can force its enemy to fight on American terms, to fight in the American style, the US can be defeated every time. This invokes another adage - we have all the watches but they have all the time. There's no need to defeat American forces in battle. You just have to bleed them a bit and wait for America's clock to run out.

Some have called it "The War of the Flea." Long before he became a household name, David Petraeus, told a journalist that all an enemy like the Taliban had to do was to be left still holding the field when the last American troops boarded the final transport out of Afghanistan. He was right then. He's right now.

What comes through on almost every page is official government lies. There was (and still is) a culture of lying, so much so that the liars are comfortable with it. Hersh wrote that Henry Kissinger lied as easily as other people breathe. Nixon , as we all know, lied. They both were behind secretive bombing in Cambodia which they denied as long as they could get away with it. Yes, Lt William L Calley Jr was the fall guy for secretive policy. There actually are honorable people in government but the liars seem to be in control most often. Maybe that's the nature of huge organization; the scum rise to the top.

Agreed, there is a lot of déjà vu in Afghanistan and Iraq and every place the America chooses to drop bombs on.

In officer school I was tasked with preparing a presentation about military justice and the taking of life. I chose My Lai as my focus. I concluded that My Lai was no outlier but merely an example of a systemic problem, one that had surfaced in the media.

The first part of my argument contended that Calley should have been hanged. Civilians are killed all the time but if their deaths are collateral damage that is to be distinguished from deliberate murder. Here I used a comparison between Calley's platoon and the Einsatzgruppen who rampaged through eastern Europe in WWII. Both committed the same crime, one admittedly on a far greater scale.

I held Calley fully accountable because he was a commissioned officer. He chose to become a lieutenant. It was not imposed on him. Having accepted that commission he accepted a responsibility far beyond anything that could be demanded of enlisted personnel, especially draftees.

Then I discussed mitigating factors, principally the 'chain of command' argument. If Calley was to receive a capital sentence, his superior, Medina, deserved a substantial custodial sentence. From there, those above who were aware of it but participated in the cover-up (Colin Powell?) also deserved to be cashiered,convicted and suitably punished.

My argument went far beyond the moral issue into the "good order and discipline" problem. Discipline, in the military context, cannot be maintained absent meaningful deterrence.
Failure to act openly and forcefully only creates a culture where similar wrongdoing is condoned and, in a counter-insurgency, round eyes slaughtering the locals defeats the entire idea of winning hearts and minds. Murder one innocent and three of your victim's relatives will come after you for revenge. Tolerating that is encouraging that and it's utterly stupid.

Fortunately the assignment was pass/fail so the lecturer had little choice but to pass me. I sensed that he wasn't entirely pleased with my presentation although he did not refute anything I said.

America has lost a bunch of wars thinking they could defeat someone committed to protecting their own territory . The politicians and they officer class may believe, but the poor bloody infantry don't.

When Canada decided to send our ragtag troops to Afghanistan (remember, they didn't even have the proper clothing? Chretien was a bitch like that), I went out of my way to remind my work colleagues about the massacre at the Khyber Pass where the British got their's and they were leaving, going back to Injuh, not staying. But were given a solid kick in the rear for their troubles. The Afghans never lost. The Soviets found that out too but Americans don't take any notice of anyone else, it's a national characteristic. They invented everything, too, you may have noticed. And were first to fly across the Atlantic despite being beaten by Alcock and Brown eight years earlier.

When America leaves, if the Taliban shoots down a few planes or helos just as a parting gift, it'll just be a repeat of the Khyber Pass, merely in miniature. Get out and stay out. That feeling of all invaded countries - the US has invaded far more than most, and the same feeling when the mother-in-law finally departs after Xmas. Thank God they're gone.

But with the US, it's like talking to a wall when you talk war. They never lose. Declare victory, then leave is their motto. The band strikes up, parades are held and history is revised, It's the American way.

BM, when Chretien approved troops for Afghanistan it was part of a multi-national unit to secure the capitol, Kabul, for the fledgling, post-Taliban central government. The colour of the uniforms at that stage was irrelevant.

Martin, IMO, was duped by Hillier into accepting the combat mission in Kandahar province. Yes, they were inadequately equipped for fighting in that terrain. That didn't stop Hillier from pushing Martin into granting his request.

We lacked much of the modern mechanized warfare gear. No assault helicopters (Apaches). No dedicated ground attack strike fighters. We eventually mustered Canadian-built LAV armoured fighting vehicles and, unlike other ISAF forces, saw fit to deploy main battle tanks that really proved their worth in infantry support.

What we lacked most of all was an adequate force. We sent a force of 2,000 soldiers that included all support personnel - medical, engineering, messing, communications, intel, etc. that meant we could never field more than about 1,000 combat troops.

Counter-insurgency is the most labour-intensive form of ground combat. Modern doctrine prescribed a force level of 15,000 to 20,000 combat troops given the size and population of Kandahar province. That left us limited to patrols, day outings with the occasional full effort mission such as the Panjwai attempt to drive the Taliban out of Kandahar.

The rest of the time we repeated what failed the French in Algeria and again in Indochina and the Americans in Viet Nam. Our inadequate numbers meant we couldn't control the territory at night, leaving the initiative to the Taliban. In other words we couldn't secure the villages from the insurgents who organized a shadow government, collected taxes, administered their territory, even provided what was often the only workable judicial system.

The worst part, perhaps, is that we never had an accounting of our successes and failures once the mission ended. The military leadership was given a pass which suggests they would probably repeat their blunders given another chance somewhere else.

Our soldiers performed very well in the field. They bear no responsibility when the military and political leadership failed them.