Afghanistan, Now They Figure It Out

The force that now safely retired general Rick "The Big Cod" Hillier assembled for the combat mission to Kandahar comprised 2,500 soldiers (1,500 supporting a battle group of just 1,000) equipped with laughable vehicles like the Itlis, a Volkswagen mini-jeep designed to navigate the densely treed European forests. 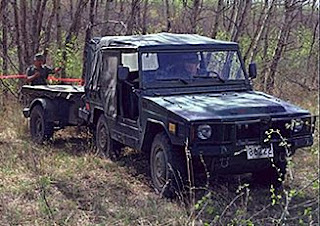 That little jeep was used to take shots at former Liberal governments for supposedly under-funding our military.   Apparently Hillier thought that, back when Chretien/Martin were at the controls, trying to pull Canada out of the fiscal nosedive they inherited from Mulroney, the armed forces should have been exempt from cuts.  Anyway, Hillier and Harper gave each other lap dances on that one.  And besides it gave our brilliant civilian and military leaders the chance to make it all right - they bought a bigger and equally defenseless, German SUV, the G-Wagon.  That was indicative of how poorly our military and civilian leadership grasped what they our soldiers were up against in Kandahar.  And that was just the beginning.

When Hillier assembled the Kandahar force, he figured 2,500 would be enough for the job which he described as a mission to "kill scumbags" that he assured reporters numbered just "a few dozen" in strength.  Hillier committed the ultimate error that has marked countless failed military leaders throughout history - he underestimated the enemy he was sending those soldiers to fight.  He underestimated their numbers, he underestimated their capabilities and, worst of all, he underestimated by light years the size of the force needed to secure a province such as Kandahar.

Current American counterinsurgency doctrine prescribes the need for one counter-insurgent (rifleman) for every 25 to 50 civilians in the area to be secured.  In Kandahar that meant a minimum combat force of 20,000 to 25,000 soldiers.   So many troops are required so that they can defend every village, day and night, to deny the insurgents access to and control of the population.   If you pass through a village two hours every day, you leave the locals subject to the whim of your enemy twenty-two hours a day.  If they want to survive guess who they'll be siding with?

For Afghanistan we needed a force equivalent to the combat force we sent to Korea but we opted to wage war on the cheap.  Even back then Petraeus was warning that counterinsurgency is the most labour-intensive form of warfare bar none.   He was pretty blunt that it was "go big or go home."   He also noted that foreign armies have to get the job done quickly because, in a short time, they can go in the minds of the locals from liberator/defender to occupier/oppressor.   The mission Hillier crafted broke every rule in the book with entirely predictable results.

Now that it's probably too late (the political war has been decided and not in our favour), conditions have changed in Kandahar province.  Now, only now, NATO and the US are beginning to field an adequate force.   A report from Reuters has an anonymous Canadian officer praising the improvements:

The NATO-led International Security Assistance Force (ISAF) has about 25,000 troops in Kandahar province, a big increase from when 2,800 Canadian soldiers tried to control the province's 54,000 sq km (20,000 sq miles) on their own in recent years.

About 10,000 Afghan soldiers also are in the province.

The sprawling ISAF base centered on Kandahar city's airport rumbles almost constantly from fighters and helicopters taking off or landing and from the noise of new construction.

The greater troop strength means that Canadians and other NATO forces can better protect residents from the Taliban, a key element of the counterinsurgency strategy laid out by U.S. and NATO commander General David Petraeus, the officer said.

"Before, we were chasing ghosts. We were never able to say, 'We're here to stay and defend you', and then actually do it. It all comes down to boots on the ground,"  he said.

Now they figure it out.   Now they flood Kandahar with an adequate force.   Now it's probably too late to make much difference.  Stephen Harper got his war on the cheap and Hillier and his generals ran cover when they should have resigned in protest.   They sent our troops to a war zone to tread water and troll for IEDs.


We had clearly defined objectives when we went to war.   We were there to defeat the insurgents and to help craft a secular, democratic, modern government to run a viable state in which the rights of everyone, especially women and children, would be upheld.   One by one, we lost our objectives.   The insurgency morphed back into a classic civil war, insurgents transformed into rebels.  We were so understrength we had no option but to embrace the doubly toxic culture of warlordism and tribalism that poisoned any chance of establishing a viable central government.  We allowed Afghanistan to become one of the most corrupt "failed states" in the world and a narco-state at that.


Every one of those sad happenings was a defeat for us and an outright, albeit unearned victory for our enemy who wants nothing more than to revert to the civil war that existed before we drove the Taliban out in 2001.   A hopelessly corrupt and predatory government works entirely to the rebels' advantage.


But we, our civilian and military leadership that is, masked their defeats by routinely moving the goal posts.  Now our objective is to simply train an Afghan army that can supposedly step into our shoes to fight the Taliban.  That's it and any way you cut it, that's an admission of defeat.   We've lost.
Posted by The Mound of Sound at 10:09 AM

Thanks for the link Christian. That Colonel is an idiot. He ignores the maxim that we may have all the watches but the Talibs have all the time. It doesn't matter to them whether it takes another two years or ten years. They're the Pashtun home team and they have nowhere else to go.

We win only when we destroy them. They win by merely surviving.

Destroying them means bringing the war to them inside Pakistan and that's the last thing we're willing to do. There's a reason Pakistan's ISI still backs the Taliban and it isn't because we've defeated them.

Listening to crap like the nonsense spewing from this Colonel is utterly disheartening. He still thinks this comes down to a military war.

Yes our side has finally amassed a suitable force in Kandahar or at least it would have been suitable four or five years ago when it could have made a difference.

Hillier is now touted to replace Williams in Newfoundland. Scary!!!