A Better Way to Vote? 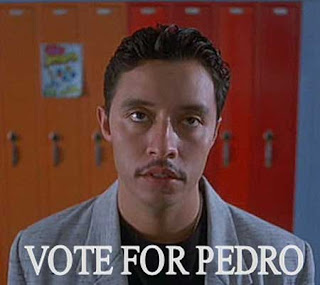 There was a discernible sense of relief across British Columbia when premier Gordon Campbell announced he was finally resigning.  But what should have been a really joyous event fizzled for a lot of us quite quickly when Campbell's departure reminded us of the province's 'other' political leader and candidate for the premiership, Carole James of the NDP.  Oh dear.

Call it the curse of living in a bi-polar province.  The NDP has its staunch supporters on the Left.  The BC Libs, despite their misleading name, have plenty of their own staunch supporters on the Right.   But the key to power lies in capturing the centre.   Most of us in the centre really don't much care for the Left or the Right which leads to a lot of negative voting.  We figure out which one of these clowns we like the least then hold our noses, vote for the other one and brace for the aftermath.

What if there was a second option available on the ballot?  What if, instead of having to vote for someone, you could vote against the candidate you least liked?  I mean we always complain about low voter turnout when that's probably in fact the result of high voter turnoff.  If you can't stand either of the choices, why bother? Just stay home.  But if you knew you could go to the polls and know your vote could be deducted from the candidate you most didn't want it'd certainly be worth the trip.   And wouldn't the results be interesting on the evening news?  "Out of 26,000 votes cast in the riding, Ms. Maple won with a net 2,000, trouncing incumbent Mr. Oak who received just a net 600."  No bragging rights there, no false "mandate" either.

The disaffected vote could actually decide elections and wouldn't that be a wake-up call for the establishment Right and the doctrinaire Left?   Just being the better of two evils might not cut it any more.  I think that's about the only way to get the Left and the Right to be more attentive, even dutiful to the centre where most of us live, the liberal centre.

There's something truly perverse in the current arrangement.   Even though you go to the polls intending to vote against a party or candidate, the only way you can do that is by voting in support of another candidate you may not consider worthy of your support.  That's giving a vote to somebody who doesn't deserve it.  It's like saying "you can only express your opinion by supporting one of these two jackasses."  If you don't think either one of them is fit for the job, why can't you express that in a ballot by having a vote deducted from the worst of them while, at the same time, not giving a vote of approval to the other one either?  Surely that's genuine participatory democracy.

Who needs proportional representation when you can take your scimitar with you into the ballot box?  Regardless of the outcome, your vote will count.
Posted by The Mound of Sound at 7:20 AM