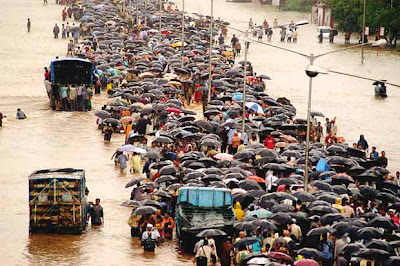 It's about bloody time.  The Indian Network for Climate Change Assessment has released a report on the sheer havoc that will descend on the world's largest democracy within twenty years.  Yeah, that's right, within the next two decades.

More flooding, more drought and a spreading of malaria would occur, as the disease migrates northward into Kashmir and the Himalayas, according to the report by 220 Indian scientists and 120 research institutions.

The temperature rise, which could be even more extreme along the coasts, would cause drastic changes in India's rain cycles that threaten water supplies and agriculture — the key source of livelihood for most of India's 1.2 billion people.

The report comes out just weeks before the Nov. 29 start of the U.N. climate summit in Cancun, Mexico, where nations will try again to reach a global agreement to limit greenhouse gas emissions thought to contribute to global warming.

" ""There is no country in the world that is as vulnerable, on so many dimensions, to climate change as India is," Environment Minister Jairam Ramesh said in a statement released with the report on Tuesday. "We must continue this focus on rigorous climate change science."

India's many ecosystems and proximity to the equator make it particularly sensitive to climate change, experts say. The fact most of the country relies on freshwater sources, rather than desalinating sea water, amplifies the threat of global warming on society.

Now, just in case you're profoundly stupid enough to say, "It's India, who cares?", I'd like to share a few thoughts with you.  Anyone who thinks India is the only country in that region that will be hard hit is delusional.  Anyone who thinks India won't be destabilized by this even dumber.  Anyone who can't grasp that three of the nations in line to be hammered by this are nuclear powers and all three of them are dependent on and have rival claims to the Himalayan glacier feeds is as dumb as dirt.

Worse still, anyone who thinks that Canada will be immune from the repercussions of this is a fool.   Do you think these countries don't already have us fingered as the key culprits in global warming?   Do you think they've somehow overlooked the literature about how we Westerners are responsible for most of the climate-change driving carbon emissions already in the atmosphere?  Do you think they won't be able to link their suffering to our indulgence and do you think, even for a minute, they won't be viewing us by our steadfast refusal to take the lead on climate change initiatives?  If you do think any of these things, all I can say (with a genuine pre-apology) is you're a fucking idiot.

Here's something else you might think about - a common grievance is a powerful force to unite otherwise disparate nations.

I want you to think about these things because I know those dumb shits, Harper and Ignatieff, and all the other Petro-Pols of Parliament Hill, won't.  Any change that can occur is going to come from the bottom up.  That means you and me, not our Parliamentary Peckerheads.   You have to agitate for action.  You have to demand better from these jackasses and, if you don't get it, you have to work to have them ousted.  Waiting for them to wake up is not an option.   There's simply not enough time left.
Posted by The Mound of Sound at 10:23 AM

I hope people in Canada are paying attention but sadly, I doubt enough are. It's like global warming has been shut out of public discourse since the Ignatieff/Rae coup of the LPC.

Today's Senate misconduct is another slap in the face.

I suspect you're right BY. My erstwhile Lib companions seem to get much more riled up over census forms and gun registries than planetary environmental collapse. I guess that'll be the face of the Liberal Party for the 21st century and I'm glad to part company with it.