In Cancun, Four Is The New Two 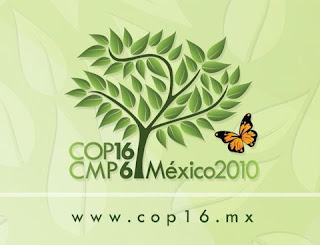 This may be what the Cancun climate summit will be remembered for - abandoning our focus on limiting global warming to 2 degrees Celsius and, instead, accepting that we can no longer stop warming of at least 4 degrees.

The Tyndall Centre for Climate Change Research has sponsored a report "Four Degrees and Beyond" that will be circulated to Cancun delegates tomorrow.  The report outlines the world we can expect to face.   From The Guardian:

"... . a billion people face losing their homes in the next 90 years because of failures to agree curbs on carbon emissions.

Up to three billion people could lose access to clean water supplies because global temperatures cannot now be stopped from rising by 4C.

"  The main message is that the closer we get to a four-degree rise, the harder it will be to deal with the consequences,"  said Dr Mark New, a climate expert at Oxford University, who organised a recent conference entitled " Four Degrees and Beyond"  on behalf of the Tyndall Centre for Climate Change Research.

A key feature of these papers is that they assume that even if global carbon emission curbs were to be agreed in the future, these would be insufficient to limit global temperature rises to 2C this century – the maximum temperature rise agreed by politicians as acceptable. " To have a realistic chance of doing that, the world would have to get carbon emissions to peak within 15 years and then follow this up with a massive decarbonisation of society,"  said Dr Chris Huntingford, of the Centre for Ecology and Hydrology in Oxfordshire.

Few experts believe this is a remotely practical proposition, particularly in the wake of the failure of the Copenhagen climate talks last December – a point stressed by Bob Watson, former head of the Intergovernmental Panel on Climate Change and now chief scientist at the Department for Environment, Food and Rural Affairs. As he put it: " Two degrees is now a wishful dream."

Researchers such as Richard Betts, head of climate impacts at the Met Office, calculate that a 4C rise could occur in less than 50 years, with melting of ice sheets and rising sea levels.

If you're 40 or under you have a pretty good chance of being around to see this played out.   The rest of us will still manage to catch the first two or three acts of this production and that'll probably be plenty.   Our kids and our grandkids - this is going to dominate their lives.

A billion people without homes or three billion without fresh water - those aren't outcomes, they're triggers.  They set off a chain of events that lead to one or more outcomes that are typically not addressed in reports like the Tyndall Centre's.   They are, however, amply addressed in research studies by the Pentagon, the British Ministry of Defence and even Gwynne Dyer in his book, "Climate Wars."

Put it this way, four degrees Celsius is a civilization changer and nothing less.  Fasten your seat belt, it's going to be a wild ride.
Posted by The Mound of Sound at 9:15 AM

My belief is this is going to happen a lot faster than we are estimating. There are already so many children dying in Africa due to lack of water and food. These corporate sods are taking bets on food. It's not going to be pretty and what will Canadians endure regarding water demands from corporate America?