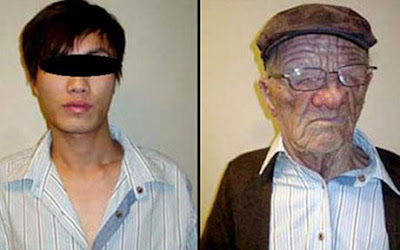 He looked just like an old white guy when he boarded an Air Canada flight from Hong Kong to Vancouver on October 29.   Once the plane was safely airborn, that old white guy went to the bathroom only to emerge as a 29-year old Chinese guy.

Apparently the man swapped boarding passes with a 55-year old American and used a frequent flier card as ID at the boarding gate.

Air Canada crew recovered the 'old man' mask the man discarded.   I wonder who got to wear that for Halloween?
Posted by The Mound of Sound at 9:49 AM

Confusing story so far. Since when does a boarding pass have your birthdate on it? How the fcuk does an Aeroplan card pass as photo ID? Something stinks.

I don't think it was the birthdate he was after but the non-Chinese name on the boarding card. That Aeroplan card thing got me too. Now can I please have my face back?

This guy is good. Next stop Hollywood. They like people like him and he would be a great entertainer. Imagine he can play Nixon, Reagan, Bush Sr. and all the rest looking exactly like them.

Did they not catch his accent? Old guy looks white.

Fortunately our diligent government is going to launch an enquiry into this. I mean this isn't something trivial like torture of Afghan detainees.

BTW, is it just me or does the guy in the mask not look closer to 95 than a sprightly 55?

The irony is, this should count as a 'regular' refugee entry (compared to the Tamil boatload): as in, it's the usual type, whereby just one or a few at a time somehow manage to get themselves on a plane, then ditch whatever illegal paperwork they had before they land. This guy just had especially BAD paperwork such that he had to resort to the disguise.

It seems Air Canada will do anything for a dollar.