Do They Stay or Do They Go? Europe's Tactical Nukes 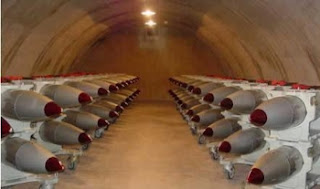 Sam Nunn and the Nuclear Threat Initiative are adamant - tactical nuclear weapons, the legacy of the Cold War in Europe, have to be secured and scrapped.  In an op-ed piece in The New York Times, the former senator described these mini-nukes as "a terrorist's dream."

If we don’t address this issue with urgency, we may wake up one day to a 1972 Munich-Olympics scenario, with a masked terrorist waving a gun outside of a nuclear warhead bunker somewhere in Europe. This time the hostages could be millions of people living close by.

Nunn isn't exaggerating.  There are plenty of these nuclear warhead bunkers throughout Europe and terrorists would have the advantage of initiative in deciding which of them to attack and when.  These are battlefield weapons, intended to be used against enemy formations.  They come in many forms including nuclear land mines, nuclear-tipped cruise missiles, nuclear artillery shells and nuclear bombs to be slung under the wings of jet fighters.   Generally speaking they're more powerful than the nukes dropped on Japan in 1945.

Nunn and his colleagues at NTI, including George Schultz and Henry Kissinger, argue forcefully for scrapping of nuclear weapons.  They argue there has been so much proliferation already and so many non-nuclear states poised on the brink of developing their own weapons that another nuclear war capable of sparking a global nuclear holocaust is almost inevitable.   They believe the only way to stop that is a general, nuclear disarmament.

NTI is trying to get its message across in time for the NATO summit that begins tomorrow in Lisbon.   However PressEurop is reporting that the decision has already been taken, those nukes are staying.

“Tactical nuclear weapons to stay in Europe,” announces De Standaard. The Belgian daily explains that NATO’s new strategic concept, to be approved at a summit scheduled for 19 and 20 November, does not call for the withdrawal of 200 American nuclear weapons located in Europe. Some countries like Belgium, the Netherlands, Luxembourg, Germany and Norway believe that “these weapons have no military purpose.” However, given their proximity to Iran and Russia, Turkey and the Baltic countries are staunchly opposed to any withdrawal. De Standaard notes that France is adamant that the Alliance should not be used to promote the cause of nuclear disarmament in Europe.
Posted by The Mound of Sound at 2:41 PM