Why Ireland Recoils at Being Rescued 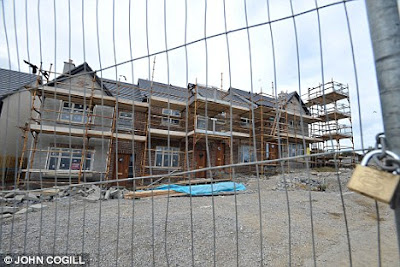 The very idea of the European Union bailing out the Irish government and the country's banks is almost more than the country can bear.  It's not that they don't need the bailout.  They do, they need it desperately.  It's not as though the bailout won't save the country from collapse.   That's exactly what it will do.

Think of it as a kid who has lost his job having to go back to live with his parents.

The Irish struggled for centuries to free themselves of British domination.  Barely a century after winning their hard-fought struggle for independence, their wanton excesses have left them right back under someone else's boot.  It's so bad that the Irish leader, Brian Cowen, is in denial, refusing to admit that a multi-billion Euro bailout is even in the works.   From The Guardian:

Historian Diarmuid Ferriter described it as devastating and a " humiliating milestone"  that the nation's sovereignty was being compromised nearly 100 years after hard-fought independence. A leader in the Irish Times talked of ignominy. " There is the shame of it all,"  it said. " Having obtained our political independence from Britain to be masters of our own affairs, we have now surrendered our sovereignty to the European commission, the European Central Bank, and the IMF."

But the country's inhabitants probably didn't have much time to read their papers yesterday. At 8.20am, the governor of the Irish Central Bank confirmed – despite protestations by the taoiseach, Brian Cowen, that there was no IMF bailout – that an IMF loan of tens of billions of euros was being prepared.

By mid-afternoon the country seemed to have descended into chaos. There were angry outbursts in the Daíl, accusations of a government cover-up, new threats voiced over the country's low corporation tax rate. Cowen nearly lost his temper with reporters. Again. The finance minister admitted the banks had " very big issues".  And to cap it all, there were fresh accusations that the banks were lying about their figures to maximise the price they would get from the state, which nationalised the banks' most toxic debts this year.

Ireland's government and economy are reeling, the nemesis that inevitably follows on the heels of hubris, but the real victim may be the Irish psyche.
Posted by The Mound of Sound at 1:33 PM

Email ThisBlogThis!Share to TwitterShare to FacebookShare to Pinterest
Labels: Ireland

Hey! Great blog! I listened to an interview on As It Happens about this and you're right about the damage to the Irish psyche. Why everyone the world over has to pay for the failures of private companies -- it's utter crap.

P.S. I came by looking for those book reviews - drop a line at my blog and the link to them! cheers!

Hi Karl. Appreciate your comments. To find the reviews of those books simply go to the search field and type in "Andrew Bacevich" and then "Chalmers Johnson". All the posts come up that way.

The Bacevich posts comprise a 3-parter entitled "America's Cancerous Militarism" plus "The Warfare State" and "The Long War and a Father Torn."

If you're interested I'd be delighted to get your feedback. Cheers