Saving the Rainforest, One Juicy Steak at a Time

Brazil is the world's second largest producer of soy beans.  It provides almost 24% of global production compared to Canada at 1.3%.   The United States reigns supreme with 41% of annual worldwide soy bean production.

But Brazil?  Second place?   How can that be?   Well the picture below is how that can be, how it is. 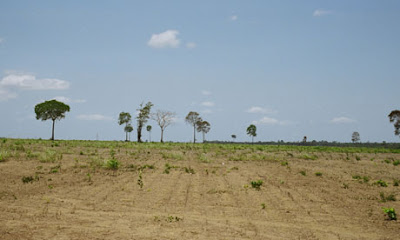 The Brits don't grow a lot of soy but they sure use a lot, especially for cattle feed.  And most of that cattle feed is coming from South America, from fields like the one pictured above.   But that may be coming to an end.

When British MPs return to work tomorrow they'll be debating a Labour private members' bill to require government to act to limit wildlife and rainforest destruction from the production of animal feed.

Many prominent British chefs are speaking out in favour of the Sustainable Livestock Bill and surveys show a solid majority of Brits favour measures to make food producers more accountable for the impact of their livestock products.  There's been one outspoken opponent, the National Farmers' Union, that thinks Parliament should keep its nose out of their business.
Posted by The Mound of Sound at 7:34 AM

Email ThisBlogThis!Share to TwitterShare to FacebookShare to Pinterest
Labels: rainforest