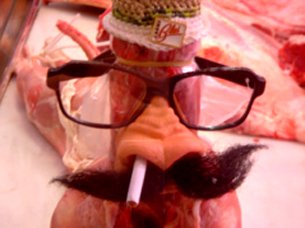 This is scary.  I just took a Pew current affairs quiz on America and I scored higher than 99% of Americans.  There were only 12 questions and mainly softballs at that.  Apparently just one in a hundred respondents got them all correct.

According to AlterNet, Americans quizzed averaged just five right.  That's five out of twelve, meaning seven wrong answers.   Less than half of Americans knew the Republicans took the House in the midterms.

If this is an accurate depiction of Americans' awareness of what's happening in their own country, it explains everything.  Everything.  Suddenly Sarah Palin, Rand Paul and the Tea Party make sense.  I get it.  At last I get it.
Posted by The Mound of Sound at 3:23 PM

It's the same in Canada MOS. Canaedians do not know much about their own country either, especially history which is not being taught in the Public School System as a separate subject. Ask a few people where you live about the east meaning the Atlantic Provinces and they won't know very much. That is why we also have the kind of government we have running Canada. So...try not to gloat so much to having figured out why things are happening the way they are in the US. Your sense of humour is also understood.

Jeebus is it really that bad up here too? I guess that's what happens when you're trying to reconstitute the peasantry to serve the ascendant oligarchs and their corporatist regime.