Training More Afghan Soldiers is A Waste of Time 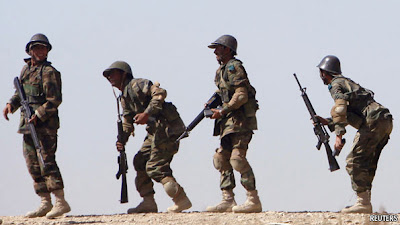 A waste of time, money and lives.   Conservative Steve Harper and Progressive Conservative Liberal Mike Ignatieff may think it's just dandy to keep anteing up to stay at the table with the big boys but they're a perfect pair of silly arses.

Somebody has to have the courage to accept that Afghanistan is a lost cause.  That takes moral and political courage on a level not even remotely approached by the prime minister and his reluctant sidekick.

Training Afghan soldiers is a farce.   How many soldiers have we already trained over the past ten years?   How many of them are still in the Afghan National Army?  For Harper, Ignatieff and all those deadheads at National Defence HQ those two questions define "don't ask, don't tell."   Because if you asked and if they told you how many Afghans have been trained and how few of them remain they wouldn't be able to conceal the utter futility of it.

Train them to do what exactly?  Banging away on their fellow Afghans?   That part is logical enough until you ask, "but why?"   Fighting is all well and good and the Afghans are about as warlike as any people on the planet.  But fighting for the sake of fighting is just stupid.  You have to fight for something.  If you don't have something worthwhile to justify the carnage, fighting is merely an obscenity.

Look at the war being fought.  Maybe there's an answer there.   Well, it's a civil war now.  It stopped being an insurgency when the Talibs began controlling territory, establishing their own political, judicial and security apparatus.  They've been doing that for quite a while.  We do chase them out from time to time at this place or that but they come back.

So what is the point of a civil war?  The rebels are fighting to oust the government and take over.  The government side is fighting to, well, to remain the government side.  So the raison d'etre of the Afghan National Army is to defend the existing government from Hamid Karzai on down through the legislature, the judiciary, the bureaucracy and themselves, the security services.  The question then becomes is there really anything worth defending?

The International Crisis Group has just released  a report on Afghanistan's judicary.  Here's the opening line, "Afghanistan's justice system is in a catastrophic state of repair."    Oh, oh, don't like the sound of that.

" Despite repeated pledges over the last nine years, the majority of Afghans still have little or no access to judicial institutions. Lack of justice has destabilized the country and judicial institutions have withered to near non-existence. Many courts are inoperable and those that do function are understaffed. Insecurity, lack of proper training and low salaries have driven many judges and prosecutors from their jobs. Those who remain are highly susceptible to corruption. Indeed, there is very little that is systematic about the legal system, and there is little evidence that the Afghan government has the resources or political will to tackle the challenge. The public, consequently, has no confidence in the formal justice sector amid an atmosphere of impunity. A growing majority of Afghans have been forced to accept the rough justice of Taliban and criminal powerbrokers in areas of the country that lie beyond government control.

...The courts, for years, have suffered manipulation from an executive branch that has abused the law to fortify its position in the ongoing tussles between the secular and religious, the centre and periphery, the rich and poor. The Afghan government’s historic inability and persistent unwillingness to resolve conflicts between state codes, Islamic law and customary justice embedded in the legal culture have further destabilized the country. The critical leverage provided to fundamentalists in the constitution has concurrently had a deep impact on the evolution of legal institutions.

...The lack of a clearly defined arbiter of the constitution has undercut the authority of the Supreme Court and transformed the court into a puppet of President Hamid Karzai. Given the wide range of powers granted the president and lack of checks and balances in the system, it is unrealistic to expect change will come from his quarter. The international community, meanwhile, has done little to create incentives for political restraint and accountability within the executive.

Well at least the Afghan people have us, the Western forces, to provide an example of law and order and the way things should be done.  What's that?  No?

...Extrajudicial actions by the U.S. and its coalition partners against Afghan citizens have also distorted the justice system and are fuelling the insurgency. U.S. and NATO actions must conform to national and international laws, including an end to arbitrary detentions. There should be no expectation that Afghan officials and institutions will realign the justice system to conform to international norms until U.S. and NATO allies adjust their own policies and practices."

A corrupt government, a corrupt judiciary, a corrupt bureaucracy, a corrupt police service and a wobbly army seeking to hold off an ideologically driven rebel force.   Wait, haven't I seen that movie before?   Yes, of course.  Vietnam!  How did that one end?

We can train more soldiers, scores of thousands of them, but unless they have a government and a judiciary and a bureaucracy and a police service they truly believe are worth dying to defend, we're just wasting our time.  The American commander in Afghanistan claims the current desertion rate is 23%.  Others maintain it is even higher.  That is not an army that's willing or able to defend the criminal enterprise known as the Afghan government.

As the Vietnamese would put it, it's time for us to di di mau out of there.
Posted by The Mound of Sound at 7:47 AM

We've sacrificed innocent lives and our moral principles for the sake of ... what? Nothing!

The money squandered in A'stan by the west could have been better used to bribe the corrupt populace into laying down their arms and picking up schoolbooks. The Taliban pays recruits 2.5x what the Afghan army and police pay. Hungry, desperate people will follow whomever provides a big enough pay cheque to feed the family.

Despite all the money we've wasted, it's still the 2nd poorest country on earth. The poorest country is Haiti, where we've spent plenty of money, too. We are not getting good ROI on our foreign "investments."

Here is an opportunity to tell Parliament what you think of this atrocious policy. Join the "Virtual March on Ottawa" on Nov. 18, and give them a piece of your mind. More information at the Canadian Peace Alliance: http://www.acp-cpa.ca/en/VirtualMarch.html

Hey JB. My take is that it definitely was a civil war before we got there and tipped the scales to send the Talibs packing. Their initial return was an insurgency that has reverted to a civil war on our watch. We failed in our prime obligation - to secure the countryside and its villagers - and that is how we lost the war. When it reverted from an insurgency back into a genuine civil war, that was the moment we lost.

We still view this as a military war, ignoring that the decisive conflict is the political war we've already lost. The RAND Corporation has run the analysis to conclude that we've not only lost, we've lost badly. We can still carry on banging away on Afghans with our armour and our artillery and our aerial bombardments but to what end? There's nothing to save.

I don't support the Taliban, anything but. That said, we haven't given the Afghan people a viable alternative. They're up to their necks in crap either way.

@PSG - thanks for the link.

We as a nation went into pre-emptive war for Dubya. Via Nato. Training war lords? How do you train a war lord? Stand the f*** back. Of course, at the expense of BLOOD and TREASURE -- Dubya's mission squandered. BTW, did you notice in the Doc - Dirty Tricks, it looked like Atwater and Dubya didn't sleep for months on Daddy's campaign? Atwater did work on Mr. Reagan's campaign, I think. He dueced Ed Rollins for his job, then it was Lee and Dubya for quite some time.

Lovely, isn't it. Check out my piece on India's climate change nightmare. There's a military disaster just waiting to happen.