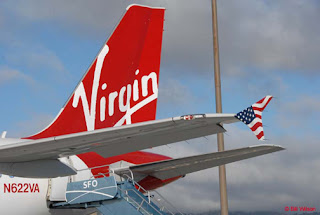 Don't they need a licence?  AlterNet is reporting that the captain of a Virgin Airways flight from San Francisco to New York, briefly diverted into Canadian airspace so he could quickly marry two gay passengers.

One passenger told this to MSNBC:


" The head flight attendant made the announcement on the P.A. " While you were sleeping, we had a little wedding in the galley. The captain diverted us over Canadian airspace so he could marry two gentlemen." The flight attendants on Virgin are very playful and really good at conversation, so we weren't sure if they were having fun with us. But we could tell at the end he was being genuine. I was traveling with two other co-workers and we had to sort out what happened. We were like, is that a service they offer?"

A Virgin America spokesperson had few details about the nuptials, but confirmed that this wasn't the first time Virgin has obliged passengers' wedding needs at 30,000 feet. Three years ago, a wedding was performed on a flight from San Francisco to Las Vegas -- officiated by Sir Richard Branson himself.
Posted by The Mound of Sound at 11:51 AM

Email ThisBlogThis!Share to TwitterShare to FacebookShare to Pinterest
Labels: SSM

"Virgin" is a very wrong name for this airline. Branson may consider to change it to Paris Hilton or Slut.