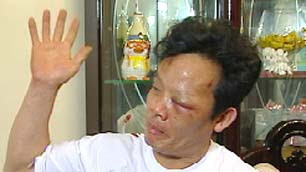 Vancouver Police have been exonerated for the beating they laid on Yao Wei Wu when he opened his door to officers at 2 a.m. on January 21.   Police later admitted they mistook Wu for someone else but, hey, you know those little Chinese guys all look the same if you beat them up enough, eh?

So the cops come beating on your door at 2 in the morning.   You open the door and they grab you.   Maybe you don't like the idea so they "tune you up" - by mistake.

The chief of police of nearby Delta investigated and ruled the cops were simply doing their job when Wu resisted arrest.   Wu says the cops were lying.   Now there's a novel idea - cops lying.   Like that ever happens.
Posted by The Mound of Sound at 1:18 PM

Tell me why a lie detector test hasn't been given to those policeman? Oh yes I forgot, they are the law.