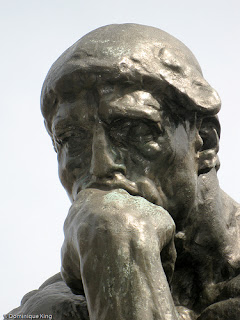 Duh, really?  We now have a scientific study, courtesy of UBC, that shows analytical thinking can be really bad for clinging to religious faith.

The psychology report, published today in the prestigious journal Science, reveals that religious belief drops after subjects perform analytical tasks or are exposed to Rodin's sculpture, The Thinker.

However, UBC social psychologists Will Gervais and Ara Norenzayan insist they are not debunking religion or promoting atheism. Instead, they are trying to figure out the psychological origins of spirituality.

The dynamic UBC research duo, who have earned international reputations for their groundbreaking studies into religion in the past six years, maintain all humans use two valuable types of thinking - intuitive and analytical.

How much you rely on one kind of thinking over another generally determines how religious you are. People who are highly intuitive tend to be more religious.

"...Gervais cited the Danish existential philosopher Soren Kierkegaard, who encouraged people to use their rational minds in shaping their spiritual convictions.

Kierkegaard also suggested, in the midst of analytical thinking, people often need to take "a leap of faith" to experience the universe's deeper transcendent mysteries.

Most people don't recognize there is a key difference between the "irrational" and the "non-rational," Kierkegaard taught.

The "irrational" describes that which is illogical and unreasonable. The "non-rational," on the other hand, refers to intuition; the sphere of the imagination, emotions and the arts.

We know from his utter lack of vision that Harper isn't burdened by an excess of "non-rational" intuition.   No, his intuition falls squarely into the "irrational" category.
Posted by The Mound of Sound at 11:27 AM

Email ThisBlogThis!Share to TwitterShare to FacebookShare to Pinterest
Labels: religion