And So Ends the Renaissance of the Canadian Armed Forces

"I do swear that I will be faithful and bear true allegiance to Her Majesty Queen Elizabeth the Second, Queen of Canada, Her Heirs and Successors. So help me God." 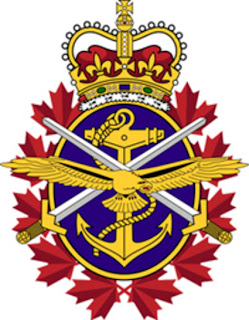 Stephen Harper  vowed to restore Canada's military to its former glory and prestige.   Instead he corrupted our military institution and consigned it to disgrace.

Harper gamed the military and forced it to choose between serving Canada or serving him.   According to the Auditor-General the Department of National Defence knew full well the actual cost of the F-35 light bomber but misled Parliament with deliberately false estimates.  Harper and his inner circle knew this too but obviously colluded with the military to first deceive the opposition and later the voting public in the last general election.

The Canadian military has always cherished its honour above anything else.   Now, having been corrupted by Harper, its honour stands in tatters replaced by a mantle of disgrace.

There are some who say that heads must roll in the upper ranks of the Canadian military.   Not so fast.  Crimes may have been committed, offences under the  National Defence Act and the QR&Os or Queen's Regulations and Orders.   Those miscreants who sullied the honour of the Canadian Armed Forces might well deserve punishment including fines, imprisonment and dismissal in disgrace.

Section 129, the catch-all clause, provides:  Any act, conduct, disorder or neglect to the prejudice of good order and discipline is an offence and every person convicted thereof is liable to dismissal with disgrace from Her Majesty’s service or to less punishment.

Section 139 prescribes punishments applicable to offences under the National Defence Act: The following punishments may be imposed in respect of service offences and each of those punishments is a punishment less than every punishment preceding it:
Courts martial are also empowered to try military personnel for violation of any civilian law or Act of Parliament and to impose whatever penalties are applicable.

Those officers who connived with Harper to mislead Parliament and dupe the Canadian people should not be permitted to simply resign.  They should be court martialed.   For the sake of the military they should be cashiered, forced out in disgrace, made to answer fully for their offences and wrongdoing.

It's quite possible that only by prosecuting the officers involved through courts martial will the full extent of the Harper government's perfidy be revealed.   That's too important - to Canada and to the Canadian Armed Forces - to allow these rogue officers to resign and quietly slip away.
Posted by The Mound of Sound at 6:48 PM