Why Does Canada Need a Hyper-Expensive Light Bomber? 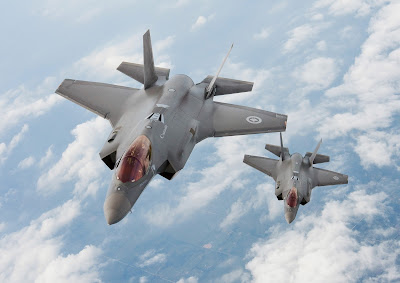 As the F-35 fighter-bomber debate returns to the House of Commons today the opposition parties, forever chasing the shiny thing, will be all over the government about costs and who knew what and when.

What if they're chasing a false scent?   What if they're not asking the questions that really need answers?  It's not as though they haven't done this before.   Look at how poorly they understood our Afghan war when Parliament debated extending the mission.  They were utterly clueless, something others paid for quite dearly.

What is really important about the F-35?   Is it cost?  Is it misleading Parliament?  That may have opposition members cranked up but it's not what truly matters to Canada.   There are other questions that are far more important.

Here's one.   Just what exactly is the F-35?  The spin is that it is a one-size-fits-all warplane.   You name it, the F-35 can do it.   Well it can't and, what's more, it was never designed for that.   The F-35 was designed in conjunction with the F-22 Raptor.   The '35 was designed to be a cheaper, shorter-range, slower, less agile and less stealthy bomb delivery system to be used in company with the longer-range, faster, highly maneuverable and more stealthy F-22 fighter.

Money comes into play here.   The F-35 and the F-22 were both developed by Lockheed Martin.   The F-35 was a low-budget follow-on to the F-22.   Lockheed had expectations of building large numbers of both.   Then reality came crashing down and the White House canceled F-22 production in mid-run.   Suddenly Lockheed's investment in the success of the F-35 skyrocketed.   And, as the F-35's importance to the Lockheed balance sheet soared, so too (oddly enough) did the airplane's supposed prowess.

A lot of Lockheed's investment in the F-35 is in the airplane's stealth technology.   An odd sort of invisibility is the bang you're supposed to get for your buck.   But there's invisibility and there's invisibility and, with the F-35, a lot of that depends on how you're looking at it.  When it's picked up by a radar head-on, the F-35 is really, really small.   Seen from the sides or the back, top or bottom, it's far more detectable to radar.  And the F-35 is specifically designed to defeat X-band radars which is why the Russians are fitting their new fighters with L-band radars which render the F-35 far more detectable.

We're going to need this thing to be stealthy from Day One to Year Thirty One.  Why?   Because if you eliminate the supposed stealth advantage you're left with a pretty sad, overpriced, underperformer.  The F-35's stealth comes partly from its shape, partly from the materials used, partly from electronics systems.   But the same shape that helps deflect enemy radar waves limits the aircraft's speed, climb rate and agility.   Those are things the F-35 sacrifices to have a stealthy shape.   And, because stealth demands that everything it needs for a mission be carried internally, the F-35 sacrifices both range (fuel load) and payload (weapons).   In fact the F-35 sacrifices every quality that defines a great warplane for the sake of a stealth capability that no one is willing to guarantee.  Is this deal beginning to sound a little thin?

There's an important geopolitical dimension to the F-35 that no one, including the opposition, wants to discuss.   It's the fact that the F-35 effectively enlists its buyers into America's aerial Foreign Legion.   To use its stealth capability to deliver bombs on targets in hostile territory (which is what the F-35 is designed to do) takes three other types of aircraft.   It takes refueling tankers deployed well forward to top up the F-35s on the way in and to give them the juice they need to make it home on the way out.   It takes airborne radar and command aircraft like the AWACS and Joint Stars to be the F-35's eyes and ears so it doesn't have to use its own radars and systems.   And it takes F-22 stealth fighters to sweep the skies clean of enemy fighters that might otherwise shoot down the F-35s.  Canada has a couple of tankers but we don't have any F-22s, any AWACS, any Joint Stars, so we really need to work for someone else and that someone else, the country that does have all those support aircraft, is the United States.

So the question becomes should Canada really become part of America's aerial Foreign Legion?  That question has to be weighed in the context of today's hyper-militarized, US warfare state where military violence has supplanted diplomacy as the preferred instrument of foreign policy.

Canada has obligations as part of NORAD, the North American Air Defence Command.    We share with the Americans a responsibility for mutual defence in the air and space over North America.  One aspect of this is patrolling and defending the sovereignty of our airspace.   Given the vastness and miniscule population of Canada's north, that dictates an aircraft that is fast, long range, reliable and very combat capable.   The F-35 simply doesn't fit that bill, not even close.  It has but one engine which is completely unsuitable for use over such a sparsely populated area with such extreme climate challenges.  It doesn't go very far and especially if it has to go far fast.  We won't be able to meet our NORAD obligations with a force of 65-F-35s unless we simply hand over effective control of Canadian airspace to the United States.

But, if the F-35 isn't what we need, what are the alternatives?  Actually there are plenty and they range from the latest European fighters to upgraded, redesigned variants of proven American fighters or, albeit politically unthinkable, the latest Russian aircraft.  All would provide better bang for the buck and all would come with a high expectancy of their performance well into the future.

But what about future coalition air wars?   For the sort of penetration bombing role the F-35 handles the alternative would be cruise missiles.   They have far better range than the F-35.   They are known to be extremely difficult to intercept or shoot down.  They have a proven ability to strike targets with great precision.  And they greatly minimize the risk to both fighter and tanker crews.  Best of all they're cheap by comparison.   For the cost of one F-35 you can pick up about 150-cruise missiles which seems like a real bargain.   Stealth requires a two-way trip.   Cruise missiles are a one-way weapon.   Stealth takes a crewman through hostile territory to the target and back out again.   Cruise missiles mean our aircrews can probably stay well back from hostile territory entirely.   And, here's the best part.   Those fighters that launch those cruise missiles can then be brought back home to serve as fast and powerful, long-range interceptors.

To me these arguments all point to the same conclusion - the F-35 is a gimmick.  You're buying a supposedly unbeatable technological edge that may, in fact, be obsolete before the aircraft enters service.  Once that stealth is countered, all that extra money evaporates and, with it, the value of the aircraft our aircrews will be saddled with for the next generation or two.

These are the questions that need answering.   This is the debate needed on the floor of the House of Commons.   This is what matters to Canada and to the school kids today who will be joining our air force to fly these things.

The Harper government is a target rich environment.

Is there any way you can get this post to Mulcair and Rae?

"What is Canada’s New Fighter for?"

"Why Militarily Does Canada Need the F-35?"

You can send it to them if you like, Alison. I've had nothing to do with Mulcair but Rae doesn't even extend me the courtesy of acknowledging my attempts to engage him.