The Opposition Doesn't Much Care But Canadians Do 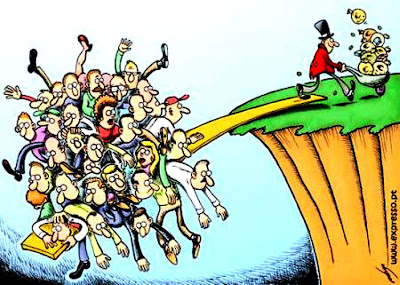 Harper, freely aided and abetted by the opposition parties in our Petro-Parliament, has been pulling Canada's political centre to what, in decent times, would have been considered the far right.

It's been almost assumed the Canadian public was like-minded.  Maybe not.

A survey commissioned by the Broadbent Institute has found Canadians support higher personal taxes and higher corporate taxes to close Canada's ever expanding gap between rich and poor.

The survey of 2000 Canadians, commissioned by the left-leaning Broadbent Institute, found that 23 per cent are "very willing" and 41 per cent are "somewhat willing" to pay slightly more tax in order to protect social programs such as health care, post-secondary education and pensions.

Liberal and NDP voters are the most supportive of this proposal, the results showed, but 58 per cent of Conservative voters are also in favour of it.

"This attitude toward paying slightly higher taxes is reflected equally in high-income and middle income Canadian households. It's only their governments who are offside," the report, the first from the newly established think tank, said.

But being offside of the public interest is standard form for governments of petro-states, countries like today's Canada.
Posted by The Mound of Sound at 10:26 AM