What Does China Want for Christmas? Coal, More Coal.

China may claim that it 'gets' global warming and that it's going green.  It's not.   This chart from the Washington Post's WonkBlog shows who's who when it comes to coal consumption from 2000 to 2010. 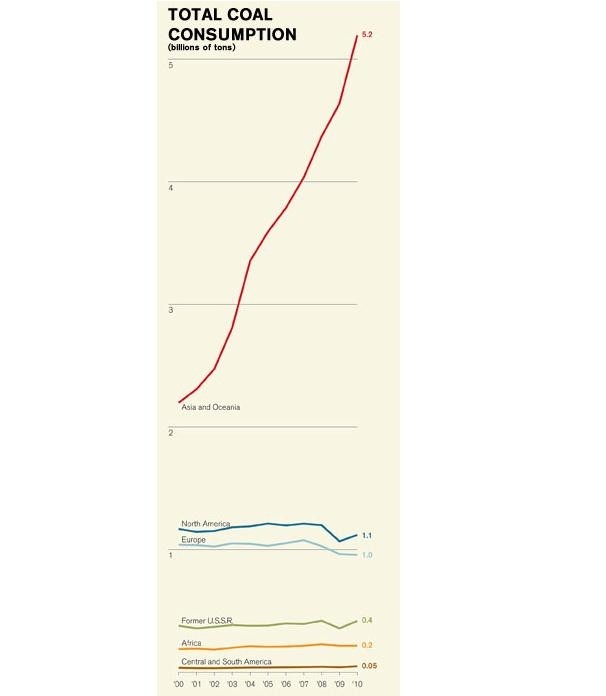 And now The Tyee reports that smokestack emissions from these same Asian coal plants are being carried across the Pacific to the west coast of North America where they contribute to low-level ozone pollution.   And, of course, right wing governments in North America are busting a gut to flood Asia with our bountiful fossil fuel abundance, particularly bitumen and coal.

"As the Seattle-based think tank Sightline has pointed out, sulfur compounds, soot, and other byproducts of Asian coal combustion are detectable on mountaintops in the western United States. Researchers have also linked ozone in the air above the United States to pollution from developing Asian countries that are burning fossil fuels.

"Mercury is especially likely to travel across the Pacific Ocean. An Oregon researcher estimates that as much as 18 per cent of the mercury in Oregon's Willamette River comes from sources overseas, increasingly from China. Another study found that human-created pollution from Asia contributed to 14 per cent of the mercury dropped on Mount Bachelor in central Oregon."

Well I guess in Harper's sick, twisted and susperstitious mind, and that of his EnviroShill Kent, there's gold in selling the Chinese the shit that comes back to us in the form of airborne toxins and carcinogens.
Posted by The Mound of Sound at 1:52 PM

Maybe that explains why the Conservatives are cutting the Environment Canada ozone monitoring program; their Chinese masters ordered them to.