Is China Out for Revenge? 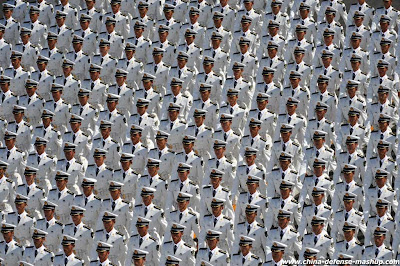 China may be looking to the future to avenge real and perceived wrongs from the past.  The Guardian reports on war games undertaken by US and Chinese commanders that have taken an eerie twist.

The US and China have been discreetly engaging in "war games" amid rising anger in Washington over the scale and audacity of Beijing-co-ordinated cyber attacks on western governments and big business, the Guardian has learned.

State department and Pentagon officials, along with their Chinese counterparts, were involved in two war games last year that were designed to help prevent a sudden military escalation between the sides if either felt they were being targeted. Another session is planned for May.

Though the exercises have given the US a chance to vent its frustration at what appears to be state-sponsored espionage and theft on an industrial scale, China has been belligerent.

"China has come to the conclusion that the power relationship has changed, and it has changed in a way that favours them," said Jim Lewis, a senior fellow and director at the Centre for Strategic and International Studies (CSIS) thinktank in Washington.

"The PLA [People's Liberation Army] is very hostile. They see the US as a target. They feel they have justification for their actions. They think the US is in decline."

During the first exercise, both sides had to describe what they would do if they were attacked by a sophisticated computer virus, such as Stuxnet, which disabled centrifuges in Iran's nuclear programme.  In the second, they had to describe their reaction if the attack was known to have been launched from the other side.

"The two war games have been quite amazing," said Lewis. "The first one went well, the second one not so well.

"The Chinese are very astute. They send knowledgeable people. We want to find ways to change their behaviour … [but] they can justify what they are doing. Their attitude is, they have experienced imperialism and they had a century of humiliation."

Lewis said the Chinese have a "sense that they have been treated unfairly".

"The Chinese have a deep distrust of the US. They are concerned about US military capabilities. They tend to think we have a grand strategy to preserve US hegemony and they see a direct challenge.

So, we're all going to line up to buy F-35s that even our national media are telling us are intended to fight China.   Great.   That will help dispel their belief in our determination to preserve US hegemony and directly challenge them.

Shit, oh dear.   What if China and India decided to collectively settle old scores with the West?
Posted by The Mound of Sound at 9:56 AM