This is one of those silly "blast from the past" stories.   While commenting on another blog I briefly revisited my younger years as a working journalist in Ottawa.  Trudeau was in power and I was immersed in the NFA (New Fighter Acquisition) programme story.

While drawing upon that experience I was struck with a brilliant image of an old Royal typewriter.   It's what we had in our newsroom, Royals and Underwoods, all manual.   I liked them so much I bought a Royal just like this one to use at home. 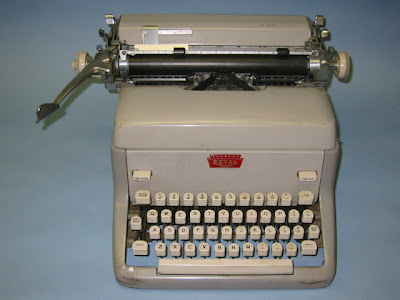 Now I know it sounds silly, but I developed an attachment to those big old manual typewriters that I never quite got over.   There was an almost therapeutic quality to them.   You did everything.   There was nothing remotely intuitive about the machine.  It simply put in print everything you did right and everything you did wrong.  It didn't second-guess the word you were trying to type.  It didn't capitalize anything.   It didn't suggest spelling corrections and it sure as hell didn't meddle in your grammar either.

But the very best thing about those mechanical behemoths was when you had a big story and were working to an imminent deadline.   You muscled your story out of that machine.   Sometimes you beat the story out of it.   The less time you had, it seemed, the harder you worked out on the keyboard.

We kept a lot of typewriter repairmen employed replacing broken springs and fixing bent keys.   They were like a good car mechanic.   They would be called in when the machine was on its last legs and then they would work their magic and, voila, you were  bashing away at a thoroughbred again.

We got pretty skilled at replacing typewriter ribbons too but nobody did it until the ribbon was long dead.   You always figured it would last until the next guy took over, leave it to him (or her).

And then one day they were all gone, consigned to the dump.   In their place stood these somber and uninviting-looking IBM Selectrics.    Electric typewriters!   Now you weren't allowed to smash the keys, you just had to touch them gently.   And that ball would whirl around in a blur and put your letter or number in perfect line with every other.   It looked like something from a type-setter.   And it didn't have cloth ribbons either.   It had these plastic cartridges.   And it even had a corrector ribbon to auto-white out mistakes.

It was like heresy or something even worse.   The man/machine bond was broken.   This thing did what it damned well wanted to do, not what you wanted to do.  It robbed you of your physical connection to your creative soul.   It was the beginning of the end.
Posted by The Mound of Sound at 7:00 PM

I have a soft spot in my heart for fully manual film cameras for the same reasons.

I so understand what you mean, 2X5