From the "They Did WHAT" File, Part Deux

Telegraph writer Emma Barnett found a surprise in her boyfriend's pants.   This: 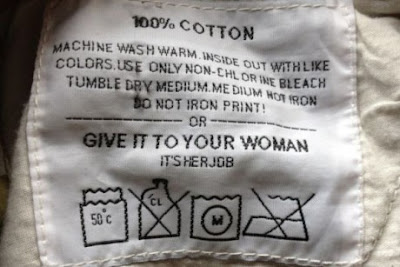 According to Salon.com, Barnett's discovery set off a firestorm:

"...the revelation that somewhere, men’s trousers are telling them to pawn off their dirty laundry on the nearest set of ovaries was not met with universal amusement. On Monday, Barnett tweeted a photo of the tag, saying she was “so shocked at this label in my boyfriend’s new trousers.”

"She wasn’t the only shocked one. As the image was retweeted across the world, it was declared “horrible” and a “disgrace” by disgusted consumers. But even more horrible were the other commenters — the ones who blithely pleaded that they were “not sure what the issue is here” or told her to get back to doing the wash.
Posted by The Mound of Sound at 12:49 PM

Seems based on a similar line in another wash tag that read "ask you mother, she'll know what to do?" Which is more accurate, less offensive and funnier.

Also if I recall correctly this tag was on both men's and women's clothing (or more accurately girls and boys clothing).