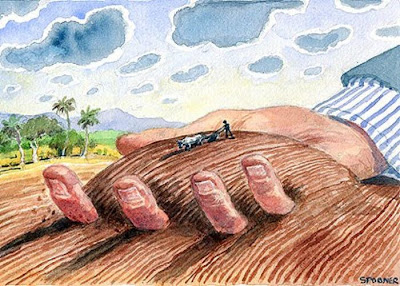 Picture a map of the United Kingdom.   Now picture eight United Kingdoms.   That's how much prime farmland has been "land grabbed" by investors at rock bottom prices from the world's poorest nations - in just one decade.

Researchers estimate that more than 200m hectares (495m acres) of land – roughly eight times the size of the UK – were sold or leased between 2000 and 2010. Details of 1,006 deals covering 70.2m hectares mostly in Africa, Asia and Latin America were published by the Land Matrix project, an international partnership involving five major European research centres and 40 civil society and research groups from around the world.

The report describes the rise of a "new intra-regionalism" characterised by growing south-south investment. Overall, researchers found more than 30% of documented agricultural deals involve investors coming from the same region as their "target" country. Expanding agribusiness companies from Brazil and Argentina seem to prefer to invest in other Latin American countries, they said, while South African investors appear particularly involved in projects in nearby east, central and southern African countries.

Little evidence of job creation or other benefits to local communities could be found among the hundreds of largely export-oriented projects, said the report. In some cases, it adds, investors have secured hundreds of thousands of hectares of prime farmland at little to no cost. One deal in South Sudan, for example, has reportedly granted a Norwegian investor a 99-year lease for 179,000 hectares at an annual cost of just $0.07 a hectare.

Governments eager for foreign investment have often gone to great lengths to advertise vast tracts of available "vacant" land in their countries. But the report says almost half of the agricultural deals studied showed the areas concerned were already being farmed before investors moved in. Competition between powerful foreign investors and local farming communities seems "inevitable", it said.

Bear in mind this is only getting started.   When the UN Food and Agriculture Organization recently announced our world has moved into permanent food insecurity, the investment vultures really swooped in.  It's said the biggest trading desk at Goldman Sachs is in food commodities.   That this sort of speculation wreaks havoc on the poorest and most vulnerable peoples and is a powerful force destabilizing smaller governments is just someone else paying the cost of doing business.

I wonder what Charles Dickins would make of our world today?
Posted by The Mound of Sound at 6:46 AM