It's So Much More Than Just a Dismal Failure 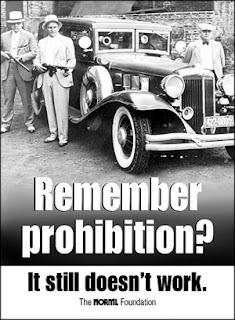 The War on Drugs is increasingly accepted as a hopeless failure.  Yet even those who do get it often act like a kid standing at the end of a high diving board for the first time.   They look down and freeze.  Nobody wants to go on the hook for decriminalizing drugs, not even for simple possession of soft drugs (although Paul Martin was man enough for that) and so the War on Drugs goes on and on for want of any idea what to try next.

A former deputy head of Britain's MI6 has released a book published by the International Institute of Stategic Studies that drives home this very point.

"Drugs have been the commodity which more than any other has primed the pump for the massive rise in organised criminality witnessed since the end of the cold war", writes Nigel Inkster, former MI6 director of operations and intelligence, and author, with Virginia Comolli, of Drugs, Insecurity and Failed States published by the IISS this week.

Drugs still account for about 50% of the profits of organised criminal groups even though many of these groups have diversified into other lucrative activities such as people-smuggling, counterfeiting, and cyber crime, they say.

In principle, therefore, collapsing the black market in drugs ought to have a significant beneficial impact on levels of violence and criminality.

The IISS study is the result of a growing realisation that levels of violence fuelled by narcotics are getting worse, and growing pressure from Latin America for a rethink of current laws prohibiting drugs. It quotes a UN report which warned in 2009: "Collusion between insurgents and criminal groups threaten[s] the stability of West Asia, the Andes, and parts of Africa, fuelling the trade in smuggled weapons, the plunder of natural resources and piracy".

Maybe, just maybe, at some point we should smarten up and realize we're not helping ourselves by banging up kids in Harper's dandy new prisons for drug possession.   Maybe it's time for a political leader who doesn't have his head jammed up his ideological ass.