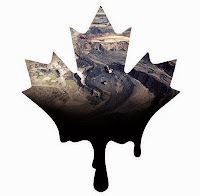 The target is also less ambitious than the one Canada set in 2009 – and which it is unlikely to meet because of the vast expansion of Alberta tar sands production under the prime minister, Stephen Harper.

The environment minister, Leona Aglukkaq, who made the announcement in Winnipeg, said the new goals were in keeping with Canada’s economic conditions.

...Keith Stewart, climate campaigner for Greenpeace Canada, said the weak target made Canada an outlier in the international climate negotiations.

“The Harper government has not only ignored its existing reduction target, but the pro-tar sands policies it has adopted are taking us in the opposite direction,” he said.

But, hey, let's not get worked up. Sure they're meager targets, the worst of what's actually a bad lot, but let's not go overboard. Harper has no intention of meeting those targets anyway. If the premiers want to do it then good for them. By now we should all be used to classic Harper bait & switch - say anything that you figure people want to hear, do nothing. Even his old pal and mentor, Tom Flanagan, doesn't hesitate to label Harper an opportunistic and chronic liar.

So Leona Aglukkaq thinks the new goals were in keeping with Canada’s economic conditions. Like most of the Denial-Cons she doesn't understand that Mother Nature trumps economics.

Can I get a source for that Flanagan quote? I'm just curious.

Government began moving to the Centre with, dare I say it, Trudea. Now we have a centralized problem with Harper who thinks he can make all the decisions without consulting the Provinces, the Members of Parliament nor the people of this country. The Gun Registry is an example. Harper is in charge of this country and no one else, and, he is going to do about the environment what he wants to do. Who is at fault for that? We are.

So, I wouldn't put a lot of stock in Harper giving Canada a weak target in comparison to other nations. A target may be a goal, but it isn't about doing anything. The world is very good at setting targets (like 2 degrees or millennium goals), and very bad at crafting policies to meet them.

If whoever replaces Harper after the next election implements a carbon tax, then this would be good. Carbon taxes are among the best policies for mitigation. And it is hard to envision a set of policies where a carbon tax does not play a large role in meeting any target the government cares to set.

Carbon taxes, bah. They're not as bad as cap-and-trade (and I'm really disappointed that the NDP is for cap-and-trade) but to really cut emissions what you need isn't all these "market based" measures, you need a combination of strong regulation and direct, positive government action. Directly produce the clean energy, directly create the transit, directly regulate, zone, and plan for communities that require less travel, and so on. Build energy-efficient social housing.

I can see some market-ish measures, but they're better targeted--subsidize and give cheap loans for energy-efficiency and zero-emission vehicles and home solar and stuff.

Do all that kind of stuff and IMO it will be much more effective than a broad carbon tax, plus it will generally help the poor rather than hosing them like a carbon tax does.

The NDP is not today a pro-science party, but it never was in past either. It used to be a workers party and socialist. I don't know what it is about now.

Carbon taxes do not have to hose the poor. It is better to not unnecessarily link two problems that are probably better tackled separately.

If too much carbon is emitted, tax it. If some people are too poor, for any reason, not just the small additional amount they may pay in carbon taxes, mitigate that by giving them money and trying to ensure full employment.

Direct action can also be good, I guess. There are successes and failures in the power generation sector.

How about this for a direct action plan: for every solar panel you deign to put on your roof, you pay to ship two panels, along with a fee for installation, to Haiti or Central America. By displacing fuel oil for electricity, they would actually do good there, rather than just make people feel good here.

@crf
The better "carbon" bargain would be to ship free condoms and birth control pills to Haiti, and to other places too...
A..non

Indeed! Over population is the world's number one problem. However, governments believe the more people, the more growth, the more money for them. Anyong wrote this.