Where Is Karl Heinz Schreiber Now That They Need Him? 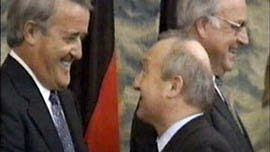 The Tories are looking to move bags of money, tens of billions, on new purchases for Canada's armed forces and nothing says Tory and money better than Cap'n Airbus himself, Karl Heinz Schreiber.  You may remember him better as the guy who handed Brian Mulroney cash-stuffed envelopes at hotel coffee shops.

The mystery Airbus commissions were chump change compared to the mountains of money being moved around these days to well-connected Canadian shipyards.  So far half a billion bucks has been shoveled out of the federal treasury so that we - you and I - can pay for invaluable upgrades to well placed Seaspan in Vancouver and Irving (yes, that Irving) on the east coast.

The CBC's Terry Milewski recently filed a timely update on the Harper government's $40-billion potlach also branded the National Shipbuilding Procurement Strategy.  You might want to clench your teeth now to make sure you don't wind up biting your tongue.

...consider Denmark, where they're doing the design work on Canada's new fleet of Arctic patrol ships. The Danes may be experts at ship design, but they just took delivery of the Polish-built hull for a new Arctic patrol ship of their own. When the finishing work is done — in Denmark — the total cost of the ship is estimated at just under $100 million.

But do the math. Five Canadian patrol ships for $3.5 billion … that's about $700 million apiece, or seven times what the Danes are paying.

...Even traditional maritime giants often decide to send the work offshore in order to save a ton of money. The British Navy may have a history of 350 years and Rule, Britannia may be a nice song, but Britain hardly rules the waves anymore. So it's building four new naval supply ships at the Daewoo shipyard in South Korea, for roughly $1.1 billion (Canadian). That's for all four.

By contrast, Canada plans to build just two supply ships in Vancouver for $2.6 billion. That's right: our ships will be will be roughly five times more costly than the British ones. The difference is … theirs are nearly twice as big.

...But that's peanuts compared with the massive project that will begin when those ships are complete: a fleet of "up to 15" Canadian Surface Combatants — full-size warships. They will, officially, cost an eye-popping $26.2 billion to build.

Unless, of course, that budget, too, increases, and we end up paying more for fewer ships, as with the patrol ships. "Up to 15" seems to leave plenty of wiggle room.

So we won't know what we'll really pay for years to come.

Nobody will cut steel for the first of the Surface Combatants until "early in the next decade," say the anonymous officials. That ship won't be in service until "the middle of the next decade." And, fair warning, that $26.2-billion budget is definitely not firm. It's "an indicative cost." After all, the officials told reporters, "we have to have a point of departure."

Whew, what a relief!  They won't even be cutting the steel for those warships until the next decade by which time Karl Heinz will be long finished his prison stint in the Deutschland .  Hey, if Harper will give Bruce Carson a "second chance" Schreiber's options surely remain wide open.
Posted by The Mound of Sound at 8:40 AM

Anyong....it's that Canadian attitude of we can buy expensive equipment therefore we are better than the rest....yoo!

Again, you're confusing me with someone else. Anyong is a different gender and lives in a different province.

Lol!! No confusion....it was me. Don't mean to disappoint you.