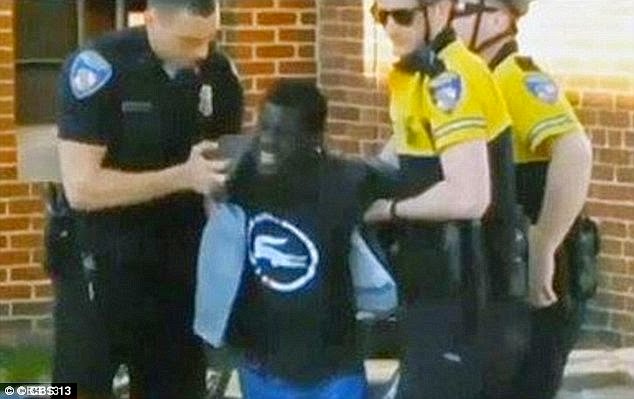 When you shackle a man, toss him in the back of a paddy wagon like a bag of potatoes and take him for a "Nickel Ride", it's murder if he dies from it.

Freddie Gray eyeballed some cops, panicked and ran, and for that he was executed in the back of a police transporter when his head slammed into an exposed bolt severing his spine.

The cops knew what they were doing.  This is old hat.  It was well known that prisoners had died from this sort of brutal abuse.

It's a sickening reflection on the state of America that so many on the right, including the FOX crew, have rallied to the cops' side and even fabricated nonsense to suggest that Gray had killed himself.  How morally degraded does a human being have to become to blame the murder victim for his own death? That is the work of a class of affluent, privileged degenerates who wield a terrific amount of power in 21st century America.

Like the Mounties who executed Robert Dziekanski, the Baltimore cops involved in liquidating Freddie Gray tripped up.  They lied.  They left stuff out of their accounts.  Bystander evidence surfaced that left no doubt of their brutal depravity.

Six of Baltimore's finest stand charged, one, the driver, with second degree murder.
Posted by The Mound of Sound at 10:54 AM

Life isn't worth anything unless you have at least 2 million dollars, are a famous person or a politician, then one is handled with kid gloves by certain authorities.

"I don't mind saying it: America's police now frighten me.

Their power and their impunity frighten me. And I'm a white, 58-year-old middle-class man. I can't imagine what I'd be feeling if I were a black or Latino kid in Baltimore."

Obama was wrong to call the rioters "thugs." When even law-abiding black kids have to fear their police they know that what happened to Gray could just as easily lie in store for themselves. It's hard to imagine what living trapped in that reality must be like.

My belief gets stronger that the death penalty should be reserved solely for police officers and others who society arms and grants extraordinary powers.

@ Anyong. I disagree. There are plenty of cell phone videos of US cops dealing with armed and unruly white people and they do not get treated like blacks. It's not remotely the same for black people even if they have money.

Obama was wrong. Imagine that.

If this ever gets to trial someone ought to plant a sound enabled go-pro in the defense offices during jury selection.

A day in the life of another black victim Mound. The first book on racism I read when I was 15 or 16 was "Black Like Me." I realized then, that life was more then make-up and music.Somethings have changed, but racism is still alive in some white souls, especially those wearing police uniforms. Any culture that allows a racist police force to abuse and even murder it's victims is a culture that is doomed.

Far too much of this madness, Pamela. Congress doesn't realize that the world is watching and this will leave scars on America's standing among nations.

I also think you are wrong in your reply. Often it counts whether black or white.