If Proportional Representation Was in Place, Conservatives Might Still Hold Alberta. 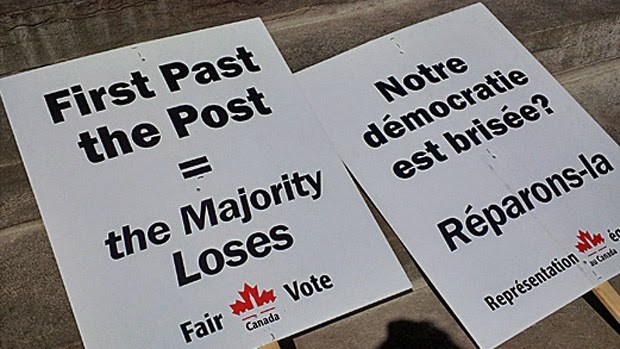 The numbers speak for themselves.  Notley's NDP took 41% of the vote, quite respectable but not all that much higher than Stephen Harper's take in the last runoff.  Between them, Wild Rose and the Cons took 24% and 28% respectively. The PCs outdistanced Wild Rose by several points yet got about a third of their seat count.

We like the idea of proportional representation when it comes to getting rid of Harper.  Not so much when it works for the NDP.

After an election in which 798,000 votes went nowhere, Rachel Notley has a golden opportunity to bring a more democratic voting system to Alberta.

“Proportional representation is a long-time policy of the Alberta NDP,” said Yared Mehzenta, spokesperson for Fair Vote Canada’s Edmonton Chapter. “We call on the premier-elect to act on electoral reform.”

“Given the distortion of the popular vote, Notley must ensure Albertans will have equal and effective votes in future elections.”

In total, 53 per cent of Alberta voters cast votes for losing candidates – with the riding of Calgary-South-East casting the most ineffective votes: 63.5% (http://myvoteshouldcount.ca/).


A system of proportional representation could reduce that number to as low as 5 per cent.

“The legislature Albertans voted for on Tuesday is not the legislature the voting system gave them,” said Mark Hambridge, spokesperson for FVC’s Calgary Chapter.

As I NDPer I still support Preportional Reoresentation and will email Premier Notley about this. That being said I can do that later, right now I'm just enjoying it.

Very good point Mound.
Sure, lets have PR (and STV) cause it seems to make more sense.
But FPTP can produce progressive or regressive results as can PR.

Look at New Zealand, moved to PR about 15 years ago and they are now firmly in the grip of a Harper clone who got over 50% of the vote recently.

Israel, Australia and much of the EU has some form of PR. Lots right wing gov'ts in these places.

(The future is hard to predict cause no one knows whats going to happen.
;-)

I posit that money and media control trump voting systems, so lets focus most of our energy gaining power not changing the system. (Have to do one before the other in any case.)

BUT - Notley was/is very impressive.
It shows what a good leader can do.
It also means that CDN politics are fluid and not so terribly NDP-adverse as I thought. A good sign for Oct. 19?

I can't see Tom catching on like Rachel but I could see it happen with either Lizzie May or Justin. I'd rather vote Green but will only do it if I think the Green candidate in my riding is best positioned to beat a CON.

In the light of the Alberta results, I will follow the leader I think will rid us of of our national nightmare.

We share similar outlooks, N PoV. I have imagined that the Greens could rise, much like Notley's NDP or Syrzia in Greece or Podemos in Spain, from fringe to mainstream especially once climate change impacts get to us. Fingers crossed.

Democracy means PR.
There is NO democracy in Canada now. If Notley has "balls" she should go for PR and change voting landscape in the whole country forever. We shall see if she is just another power hungry politician or a visionary...
A..non

Yes, if Canada was a democracy, like 32 of 34 developed countries, neither the AB NDP, ON Liberals or the Harper Cons would've gotten absolute power on 40% of the vote. None of these parties obviously deserved it.

In democratic countries, a party or coalition must have the support of an actual majority of voters (50% + 1 vote) to form the government of the people.

The will of the people is looked down on in aristocracies like the UK and Canada. Which is why most developed countries fixed their voting systems a century ago and most people are ignorant of electoral reform in the UK and Canada.

The zealots at Fair Vote (religiously opposed to ranked ballot voting) are actually further from their goal of legislating PR than they were a decade ago.

I hope Trudeau wins a fake majority and burns them with another designed-to-fail PR referendum. (Since democracy in Canada is a joke, the best one can hope for is a funny one...)

Hard to argue with any of that, Ron. thanks