Ooh, This Is Beginning to Reek of RCMP and Richard Nixon 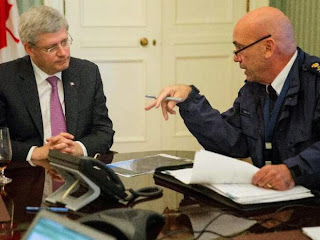 As the Mike Duffy trial begins to dissolve in the Crown's hands, it's coming to smell like a political drive-by hit.  Steve Harper's attempts to distance himself from it only makes the stench worse.

While the Judge publicly rattled the Crown’s case against Duffy, Stephen Harper blundered in parliament by fumbling the ball on the five yard line. In Question Period, under queries from NDP leader Thomas Mulcair, Harper pulled the standard Harper move — suggesting that Mike Duffy was to blame if his actual residency disqualified him from taking a Senate seat from PEI.

“Mr. Speaker, according to constitutional practice, all senators must make such a declaration [of residency]. As members know, it is Mr. Duffy’s actions that are before the court right now.”

This is a dude in the closet.

One hundred gallons of Kool Aid chugalugged in a minute are required to believe Harper’s absurd attempt to say, for the hundredth time, that the prime minister of Canada is responsible for absolutely nothing when things go south politically.

Visions of Nixon: If your prime minister does it, it’s not a crime.

Here is the constitutional truth about Duffy and the Senate. Both the Prime Minister and the Governor General have the obligation to assure that an appointee is eligible for an appointment to the Senate before they are elevated. The GG accepts the appointment on the advice of the PM, not the nominee. They not only blew it, they knowingly blew it — unless the PM is going for the Hans Christian Anderson Award for fairly tales; that he was the only guy in Ottawa who didn’t know where Mike Duffy — or Pamela Wallin for that matter — really lived.

Of course Steve knew what was going on.  This is, after all, the micro-manager in chief, Canada's CEO, Chairman of the Board.  He's also demonstrated, time and again, that he's a chronic, if clumsy, liar.  Steve lies with an expectation that others will accept what he says without too much scrutiny.  When one lie falls apart, he simply substitutes another.

Yeah, sure, Steve needs to be hauled into court and put under oath.  He has a lot of explaining to do and lies floated on the floor of the Commons are no substitute.  But there's something else that demands close scrutiny - the top cop in the RCMP, Commissioner Bob Paulson.

The Crown may be looking hapless but those prosecutors are working with the load of garbage dumped on them by the Royal Conservative Mounted Police.  It was these cops who decided that Duffy had committed what has been called "Immaculate Bribery."  It was criminal for Duffy to receive the money but there was nothing criminal in the giving of the bribe, even with the conditions attached to it.  Really, Bob?  You really signed off on that?  As investigations go, this one is pure political Kabuki theatre.  Is Paulson Steve Harper's lap dog or did Steve have to hit him a couple of times with a rolled up newspaper first?

As long as the Prince of Darkness has a majority, Paulson won't have to account to opposition MPs for the RCMP's role in this Potemkin investigation.  I'd bet that if you could look in the top drawer of Paulson's desk you would find his resignation letter already signed, ready to go in case Paulson has to bail out in a hurry.

Not that he'd care about being under oath. The only advantage I guess is when he contradicts himself, demonstrating that he has to have been lying at least part of the time, people might actually take it remotely seriously.

What a friend we have in Harper ..

I disagree, PLG. I think Harper is soiling his petticoats at the prospect of having to endure two, three, possibly four days of cross examination by Don Bayne.

Remember, this is not a man who tells the truth effortlessly. His default mode is to 'game' virtually everything he says, to milk every last drop of political advantage he can extract from every word.

Harper has been tripped up before - by himself. It happened in Grewal, in Cadman, big time in Bruce Carson and he's already given multiple, inconsistent statements on Duffy-Wright.

I was pretty decent at cross-examination but Don Bayne is positively masterful.

I would love to see Slippery Steve pulled kicking and screaming to the stand and if he doesn't go, he'll have to tell ALL Canadians why he is above the law.
But my greatest fear is that with all this mess going, all of the disasters, Slippery Steve will still manage to skulk away and deflect to Justin or Tom.
His tagline to account for his last 10 years of micro-management without anything pointing back to him?
Not My Problem.

What advice did the head of Harper's department, the Privy Council Office (at the time Wayne Wouters), give to the the PMO regarding Duffy's residency? Were they not consulted? If they were, what advice did they give?

Harris in his interview with Paikin at TVO quoted Preston Manning as having said that words do not mean much to Steve. Thus Manning had apparently suggested that Steve is a f.... liar, no?

It should not only be Steve that should be made to testify under oath. The Right Hon. Double Dipper (having apparently double dipped on his salary at U. Waterloo and his GG salary), David Johnston, too should be on hauled to testify under oath if they knew that Duffy's residence was actually in Ontario. After all, Duffy's primary residence, and also the ambiguity of the Senate rules for reimbursements, are the two key issues being argued in court today.

What will be rich, Mound, is if the Crown ever gets around to the charge of Duffy accepting a bribe. Its explanation of how it is only a one-way street, leaving Nigel Wright good and pure will undoubtedly be a wondrous tale of political doublespeak for the ages.

Duffy claims he personally consulted with Harper, a claim that Harper is using "anonymous sources" to deny. Michael Harris and a few others have the guts to stand up to Harper but most of the media is spineless.

As for GG Johnston, I'm guessing it was GG Michelle Jean who ushered Duffy into the Senate.

@ Lorne. Judge Vaillancourt has already clashed with the Crown over the dismal quality of its case. I can only imagine how the judge is going to deal with the novel proposition that a bribe can be a solo crime.

The way this is going it wouldn't be all that surprising to see the Crown, at some point, cutting its losses and shutting this down. If the evidence continues to build the case for calling Harper to testify under oath, the pressure to ditch the whole thing could become unbearable.

Ditching it might be worse for Harper. Duffy would just take the whole mess to the media, emails and all, where rules of evidence don't matter a whit.

This whole, rotten business has an aura of having been gamed from the get-go, Dana. Harper, the self-identified "smartest man in the room", seems to have had some concept of how this was to play out.

I've been told that, among the mountain of e-mails, there's one, from Harper's counsel, Ben Perrin, I believe, that, if Duffy fights back they'll be able to bankrupt him. If that's the case then it suggests this whole thing, contingencies included, was carefully mulled over.

It plainly hasn't gone as Harper & Co. expected which could explain why the Crown has been left dishing up utter crap. It suggests that they never expected this thing to get to trial and now it's out of their control.

I agree that the game has been on since day one but I have a question regarding the charges.

It's my understanding that only the Crown can drop charges now. Is that right?

If the Crown does drop the charges does the Defence table have the right to ask why they're being dropped or why they were brought in the first place? Or better yet to decline to have the charges dropped and insist on the trial go ahead to it's conclusion.

well I hope this goes on long enough to drag that "bribery is a one way street" BS under the microscope:P

and I hope they bring back Wright to testify, I think the idea that he doesn't have to appear as a witness against duffy really bizarro.
but of course im not a lawyer, so the serpentine loopholes in law arent always clear to me.