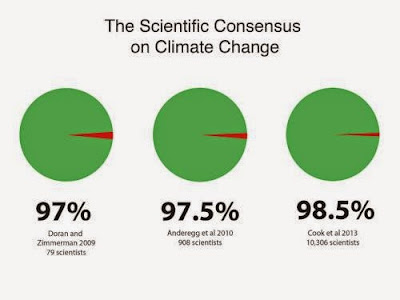 Okay, I agree - the science isn't in.

Not all of it anyway.  There's more coming in almost daily - research, studies, experiments, observations and analyses, projections - there's a continually growing mountain of information and knowledge.

The thing is - while there's more to come, it would be beyond foolish to expect anything else in a world caught in a state of flux.  The important thing is that this new science pouring in affirms, corroborates, supports and reinforces the scientific consensus on anthropogenic or man-made global warming.

Sure the Earth has always changed in the past only not like this and never in the history of our species or most other species for that matter.  Science is also exploring our resilience to warming and it finds that, overall, life can evolve or adapt to about one degree Celsius per millennium.   That's the rate of warming we can be expected to sustain without significant die off.  Can you spot the problem there?

Our leaders have come up with this magical, 2C target.  In other words, we need to limit warming to no more than two degrees Celsius above pre-industrial levels. That's their notion of the limit within which we can have a reasonable chance of avoiding truly catastrophic, runaway global warming.  Keep in mind this one thing - they're approaching this the way a bookie does the World Cup.  They're gambling on bookie odds.  Only the wager isn't a paycheque, it's the survival of our civilization, the future of our kids and grandkids.

Speaking of bookies, something of which I will admit to no knowledge myself, you might be aware of what they call the "betting line."  These are the odds. They're not fixed in stone.  The line tends to move as the big game nears.  Maybe a team's roster changes, a star player is lost to injury here or the opposing team gets a favourable trade there, the sort of thing that can influence the outcome of the game.  Risks are assessed, odds adjusted and the line changes accordingly.

Our betting line on climate change, however, is fixed in stone at 2C.  It's been 2C for ages and it hasn't budged even as the science flooded in demonstrating that our optimism was unfounded.  It's like discovering the Patriot's entire offensive line has been lost in a plane crash and still sticking to the old betting line.  That's insane.  Yet "insane" has become the lingua franca of global discourse in the 21st century.

Know what else is insane?  The attitude of our leaders that this is a problem we can tackle in 2030 or 2040 or eventually, just not now.  We have an economy to grow and grow and grow.  We need to find ever more cheap, fossil energy to fuel perpetual, exponential growth.  We take it, purely on faith, that growth is a matter of life or death to our society.  That's insane and like every other delusion it's completely without substance or foundation.

Climate change campaigner, Bill McKibben, of 350.org, contends that, in the next ten years, just ten, we will decide the fate of the world for thousands of years.

It could, if we set our minds to it, be the decade when the planet's use of fossil fuels peaks and then rapidly declines. We've built a movement that, for the moment, is starting to tie down the fossil fuel industry: from the tarsands of Alberta to the (as yet unbuilt) giant new mines of Australia's Galilee Basin, the big players in coal, gas, and oil are bothered and even bewildered by a new strain of activist. They're losing on the image front: when the Rockefeller family, the Church of England, and Prince Charles have begun divesting their fossil fuel stocks, you know the tide has turned.

And with it comes the sudden chance to replace that fossil fuel, fast and relatively easily. Out of nowhere the price of solar panels has fallen like an anvil from a skyscraper, dropping 75 percent in the last six years. Renewable energy is suddenly as cheap or cheaper than the bad stuff, even before you figure in the insane monetary cost of global warming. So in Bangladesh they're solarizing 60,000 huts a month; the whole country may be panelled by 2020.

That rapid change wouldn't be enough to stop global warming -- we're already seeing drastic changes, as anyone living through California's drought can attest. We'll continue to see record-breaking years (like 2014. And like 2015 so far). We'll have to deal with record flooding. The ocean will grow more acidic. But maybe, if we really ratchet up the transition we'll avoid a challenge of civilization-scale.

Or, of course, we could change slowly, the way the Koch Brothers would like. (And for that matter, most political leaders). We could do nothing out of the ordinary, and wait three or four decades for solar power to replace fossil fuel. It would rattle the fewest cages in the short run.

And in the long run it would, by most of the computer models, condemn us to four or five degrees Celsius of global warming -- enough to take the world utterly out of the rhythms of the Holocene, enough to call into question our ability to grow sufficient food or find sufficient water.

It may be tempting to dismiss McKibben as an alarmist.  He's nothing of the sort. The top scientists in the myriad disciplines that directly or tangentially deal with climate change might even find him unduly optimistic.

My take is that we haven't much hope unless we find a way to release the choke hold that neoliberalism, market fundamentalism, has on our political classes. Their "political capture" by Big Fossil and pocket-liners like the Koch brothers was no accident and sets them up as a powerful force to block the change so badly needed.  Harper, Trudeau, even Mulcair - they've got to go, the lot of them, if our kids are to have a chance.  Ten years and the clock is running.
Posted by The Mound of Sound at 7:17 PM

Alas, even a vote for the Greens doesn't address change at this level:
http://www.counterpunch.org/2015/05/08/renewable-energy-isnt-a-shortcut-to-reversing-global-warming/

"Liberals and social democrats readily acknowledge the real danger of global warming but, no more willing to tamper with the machinery of capitalism than conservatives, promise that the changes will be cost-free." (I'd place Greens in with the "Liberals and Social Democrats)

N PoV, Greens "get" steady state economics, they really do.

Your last paragraph says it all. CBC's the "Ideas" program aired the following the evening of May 8, 2015. "The Digital Economy: Capitalism 2.0? Twenty years after writing his bestseller The Digital Economy, Don Tapscott looks at the new challenges facing the digital economy and the questions every thought leader needs to ask in order to thrive." There was a discussion panel including past Premier Rae. Most of the discussion centred around how long it would take to implement the "Sharing Economy". It would take until at least 2050. People do not seem to realize the dire importance of change now. Germany has and is implementing changes in the use of alternative energy along with sustainability. There are other countries sharing this bold vision. The question is "how are we Canadians going to address the "environmental now" question publically for the common good of Canadians now and especially for those who haven't been born yet? We need and deserve a complete turn around from what is taking place at the moment in this country.

Hi, Anyong. I just posted an item summarizing this week's lectures and readings from the Potsdam Institute course on climate change.

It was a stark depiction of what these experts foresaw awaits humankind in a 4C world which is where we seem to be heading. What made these lectures especially cogent is that they linked climate change impacts, man-made and natural or "runaway" impacts, in the context of a "cascade" where these factors - droughts, floods, heatwaves, ocean acidification, sea level rise, etc. - reinforce each other.

Yet the reality these experts were revealing is not even in the public discourse. We're proceeding in a dangerous, alternative reality that virtually ensures we'll be overtaken by events.

Like I mentioned about a week ago, we are going to kill ourselves off. Actually, what a great break for the earth to replenish itself.