"It Was Only a Matter of Time" 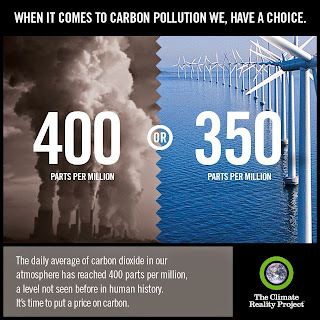 It's taken two million years but we've done it!  Finally, we've reached CO2 levels exceeding 400 parts per million everywhere on the planet, even the Arctic.


The milestone was announced by the US National Oceanic and Atmospheric Administration (Noaa).

They said it was the first month that the entire globe broke 400ppm, reaching levels that haven't been seen for about two million years.

Noaa's Pieter Tans said that reaching the mark was "a significant milestone".

Scientists announced that CO2 had passed the 400 ppm level for the first time in the Arctic in 2012, and then at Mauna Loa in Hawaii in 2013.

"It was only a matter of time that we would average 400 parts per million globally," said Mr Tans, lead scientist at Noaa's Global Greenhouse Gas Reference Network.

He added that CO2 has risen more than 120 parts per million since pre-industrial times.

Cognitive Dissonance ...
Its a lovely day ...
"the human brain is poorly equipped to respond to global warming"

A couple of years ago I wound up sharing a couple of beers with a climate change scientist working for the BC government.

At first it was the mandatory optimism of "we can still do this." After a couple of brews that gave way to "we're so screwed."