The Final Chapter for Bashar Assad 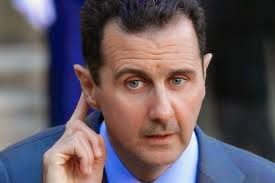 Things are not looking up for Syrian strongman, Bashar Assad.

His first problem is the Sunni Muslim coalition of Turkey, Qatar and Saudi Arabia (ordinarily not the best of friends) that has materialized for the sole purpose of running Assad out of Damascus.

The advances are not only a sign of the Assad regime's weakness, said Mario Abou Zeid, a research analyst with the Carnegie Middle East Centre, but also indicative of the strength of the new alliance between the three Sunni power brokers.

Their desire to force a shift in the balance on the ground in Syria before further negotiations about the country's future are held to have finally over-ridden long-held regional differences, he said.

"This regional group has forced those opposition groups and various factions fighting on the ground to fight under one umbrella," he said.

"By creating this 'Army of Conquest' and by supporting it, having the Nusra Front as its main pillar and surrounded by the remnants of the Free Syrian Army as well as groups such as Ahrar al-Sham, Jaish al-Islam and others, this type of cooperation … has been a tremendous success."

The model is now being copied in areas such as the Qalamoun – the mountain ranges between Lebanon's Bekaa Valley and Syria – where opposition forces this week began a fierce battle against the Islamic State, Syrian regime forces and the Hezbollah militants fighting alongside them. This is a three-sided conflict - on one side are the Nusra Front and its allies backed by Qatar,Turkey and Saudi Arabia, on the second side are Hezbollah, the Syrian regime and Iran and on the third side is the so-called Islamic State.
Assad also faces the threat of a coup.  The president has already arrested his spy chief, Ali Mamlouk.

Mr Assad is struggling to keep together the regime's "inner circle", who are increasingly turning on each other, sources inside the presidential palace said.

Even before Mr Mamlouk's arrest, the web of intelligence agencies with which the regime has enforced its authority for four decades was in turmoil, with two other leaders killed or removed.

Last month, Rustum Ghazaleh, the head of the political security directorate, died in hospital after he was attacked by men loyal to General Rafiq Shehadeh, his opposite number in military intelligence, who was in turn sacked.
Worst of all, Der Spiegal reports that Assad is running out of troops and has been forced to recruit mercenaries, now mainly from Afghanistan.

In order to prevent the collapse of Syrian government forces, experienced units from the Lebanese militia Hezbollah began fighting for Assad as early as 2012. Later, they were joined by Iranians, Iraqis, Pakistanis and Yemenis -- Shiites from all over, on which the regime is increasingly dependent. But the longer the war continues without victory, the more difficult it has become for Assad's allies to justify the growing body count. In 2013, for example, Hezbollah lost 130 fighters as it captured the city of Qusair and has lost many more than that trying to hold on to it. Indeed, Hezbollah has begun writing "traffic accident" as the cause of death on death certificates of its fighters who fall in Syria.

The Iraqis have almost all returned home. Rather than fighting themselves, they largely control the operations from the background. The Iraqi militia Asa'ib Ahl al-Haq, for example, organizes the deployment of Pakistani volunteers in Syria. But no ethnic group is represented on all of the regime's fronts to the degree that the Afghan Hazara are. Exact numbers are hard to come by, but some 700 of them are thought to have lost their lives in Aleppo and Daraa alone. What's worse, most of them don't come completely on their own free will.

It's hard to ever count a guy like Assad out but his regime does appear to be unraveling even as his opposition coalesces into something far more effective. Will this coalition dissolve once Syria is sorted out or will they continue to reduce ISIS in the field?
Posted by The Mound of Sound at 9:38 AM

So I suppose the question is not so much, what will they put in his place, but will they bother to put anything at all or just leave it another Road Warrior no-man's-land like Libya?

It's spring, so there is a fresh crop of heart eating Jihadi's, fresh from training, loaded up with new weapons, this time with some Turkish "skin in the game" to keep them from falling apart,

And so the War Tanks and MSM is full of "Assad is Doomed" stories.

While the Regime focuses on securing the Lebanese border and the Jihadi's south of Damascus, with little news in the MSM about their "victories",

The heat of summer will hit, the Jihadi's will start their head chopping infighting over whom is most favoured by God, and the spoils of War,

And in the fall, like clockwork, the Regime will launch new offenses towards the Jihadi's on the Turkish and Iraqi borders, and twitter will fill up with "Can Assad Win?" tropes.

So Can Assad Win?

Nope, not as long as there are 60,000 freshly trained Jihadi's from all over the world, trained, armed, financed and commanded by Saudi Arabia, the GCC, Jordan and Turkey, showing up every spring.