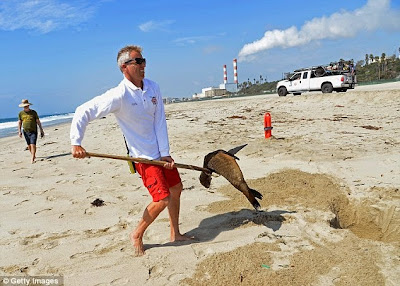 If you want to see what climate change looks like, venture no further than the beaches of southern California.  There you'll find hundreds of starving and dead seal and sea lion pups, victims of what I call "differential climate migration."

Breeding adults still go to the rookeries where their species have given birth to their young for thousands of years.  Except that climate change has triggered a deadly shift.  The prey fish that have sustained the pups in the past, mainly sardines, have headed north for cooler waters as the local waters warmed beyond their liking.

Everything is migrating away from the equator, even plants.  The seals and sea lions will too even if their numbers are greatly reduced.  It's a matter of time.

An acquaintance who lives in the Los Angeles area tells me that the carcasses of the dead pups are being gathered up in black plastic bags and are making a trip to the piers and boardwalks very gruesome and wretchedly smelly.

And the band played on.

I read something about bears' hibernation patterns changing. If I recall they're facing a problem with edible plants not being available when they come out of their dens.

Another species at risk is the grey whale. They used to feed in the Bering Sea but their feed stocks have migrated into the Beaufort Sea, increasing the time and distance of the whales' migration. This is being noticed in a decline in body mass but the long term outcome is unclear.