Canada's Vintage Submarine Fleet to Sail On Into Antiquity

Canada's aging Victoria-class subs are in for a facelift intended to keep them in business another 6 to 13-years.  The refit is estimated to cost somewhere between 1.5 to 3-billion dollars which likely means 4-billion, maybe 5.

Think of it as doubling down on a very bad bet.  The boats began their service life with Britain's Royal Navy in 1990 but it wasn't long before they were mothballed.  The Chretien government, on the advice of the DND brain trust, decided they would do for the Royal Canadian Navy for the bargain price of $750-million.  Badly built and badly maintained by the Brits, they've provided very little usable service to Canada and they've cost a fortune to try to repair, many hundreds of millions of dollars and it's still going on.

Now we're about to throw billions more into these vintage subs even though replacing them with far more capable, state of the art diesel subs might be cheaper.  Subs like Canada's can stay underwater for a day or two but that's about it.  Today's diesel subs come with AIP or "air independent propulsion" that introduce fuel cell technology to allow these boats to remain underwater for a couple of weeks at a stretch.  Huge difference. 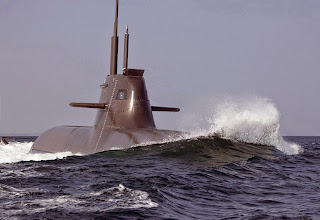 One of the most popular new boats is the German Type 212 u-boat.  These boats, now sailing with navies around the world, are believed to cost about 370-million Euros per boat.  We could well spend more than that just putting new tires on the old Datsun.

Of course ditching the Victoria-class boats with their poor performance and insanely costly repair bills would be tantamount to admitting that not only were we idiots to buy the damned things, we've been even bigger idiots to pour such massive amounts of money into repairing and re-repairing them ever since.  3-billion Canadian dollars equals roughly 2.2-billion Euros, more than enough to replace those vintage boats with German 212s (they're good, even Israel operates them).

Ah, yes, but do the Germans really know how to build a submarine? Is there something in their history that might give a clue as to their ability to build something better than our Victoria-class? (God, both my tongue and my cheek are in major pain.) Maybe we could put wings on the BritSubs as a stopgap until we can afford those F-35s?

There's a genuine role for submarines in Canada's navy, more so given the rate at which the Arctic is opening up. The modern diesel boats would be helpful.

Danneau - the Germans still call them unterseeboots. Nostalgia, I guess.

.. Ten Years Later ..
the Brit U-Boats go together with the great
Harper Navel Procurement Action Plan
(when in doubt, lie lie lie and then punt)

Who voted for these incompetant asshats
Where is our money? Or our ships?
Hey ! Helicopters... oh right..

Never, ever underestimate peoples' desire to keep their mistakes out of limelight and avoid humiliation. And I am not even talking @ $$$. Think jails and gallows.
But we are supposed to have transparent democracy to keep those desires in check, hi, hi, hi...
A..non

we got these boats IMHO to fill a gap in the trillion dollar pentagon budget. Place special forces close to shore.
Well we never did that but we sure paid a price for trying.

YES, the submarines are likely dated.
Let us not forget.

The first sub to arrive in Canada had a dent in it; which I am sure was not the case when it left Scotland.
One subs crew, perhaps the first one, disposed of two tons of potatoes purchased enroute from Ireland because they were rotten! not the smartest crew when it comes to observation!
Another boat,another crew,flooded the battery room with saltwater and caused many problems.
Yet another crew ignored the sign saying DANGER do not open this door when the water hatch is open; they did, caused a fire and the rest is history.
When finally in service yet another crew hit the bottom of the Pacific ocean causing much damage to the boat!
Perhaps we should demand more of our submariners before entrusting them with more sophisticated taxpayer funded hardware?

More Weapons of Mass Destruction.
Who do we think we are !!??

The idea of the submarines was to provide a 'cheaper' alternative to using surface ships for patrolling the Pacific.
The submarines purchased have about one third of the operating crew that a surface vessel has & is about as fast.
Much of the cost of these boats was offset by the UK using the maritimes for air combat training plus the USA chipped in so as to practice war games against diesel powered craft.
The real expense was for the refit which was quite protracted & costly.
I doubt anyone will expose the real cost of these submarines.
YES; they may well be crap, but let us not lose sight of the whole truth.

Come now. You can't expect our lords and masters to take seriously a toy that doesn't even cost a billion dollars a pop. Military toys have to be really expensive to give that frisson of conspicuous military consumption.

Just part and parcel of Dear Leader Shit Head's plan to defund such pesky, superfluous piffle as healthcare, post secondary education, pensions, the environment, collapsing bridges, (real) job creation, food, work, and transportation safety, basic scientific reasearch, and climate change mitigation and spend it on a POS airplane that Kelly Johnson would be loathe to ever sign off on if he were alive today and embarrassingly shitty subs that the Brits refuse to admit they got suckered on - even though they did.

This is why we won't be able to afford nice things...ever again.

ThinkingManNeil is starting to sound like he's almost getting angry.

We're going to need a lot of that.

For a government that never misses a chance to thump its chest and proclaim its devotion to the military, Harper & Co. has been the worst I've ever known at keeping the armed forces in decent kit.

Their best buy, so far, has been the C-17 if you believe Canada needed five of them. The Leopard 2s were a smart buy back when they were going cheap (pre-Ukraine).

It's hard to tell what's going to be left of the RCN by the time the shipyards begin cutting steel which is still five years off. There will supposedly be fifteen new warships (wink, wink) but we'll be paying up to seven times more than the market price.

The army's kit is pretty clapped out from our adventures in Afghanistan but the light armoured vehicles Canada is building are going straight to Saudi Arabia for democracy suppression.

Now it sounds as though we'll spend considerably more for a late-life refit of these four dodgy Brit subs than it would cost for truly state of the art new boats from Germany, France or Sweden.

It's a good thing the public doesn't get to see where all that money really goes. What was that guy's name? Oh yeah - Karl Heinz Schreiber.