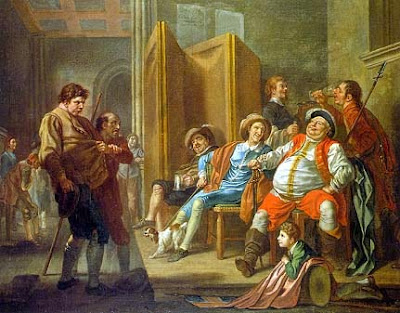 Don't those damned Albertans just love to lord it over us here in British Columbia.  With all that oil money...  what, they don't have it anymore?  It's gone?  Again, really?

Well, naturally, being Albertans they'll just come up with something else to show off.  This time it's their provincial NDP and, to me, it's positively Shakespearean. In "Supernatural British Columbia," our NDP couldn't even win an election they couldn't lose.  In oh-so-Conservative Alberta, the NDP is poised to become the next government.  Slow burn - sssssss.

Like I said, it's Shakespearean and reminds me of nothing so much as this passage from Henry IV, Pt. 1, in which the King laments his own wastrel heir who spends his time drinking and wenching while the Duke of Northumberland's son Henry makes a big name for himself on the battlefield.

Yea, there thou mak'st me sad, and mak'st me sin
In envy that my Lord Northumberland
Should be the father to so blest a son,
A son who is the theme of Honor's tongue,
Amongst a grove the very straightest plant,
Who is sweet Fortune's minion and her pride;
Whilst I, by looking on the praise of him,
See riot and dishonor stain the brow
Of my young Harry.  O, that it could be proved
That some night-tripping fairy had exchanged
In cradled-clothes our children where they lay,
And called mine "Percy," his "Plantagenet"!
Then I would have his Harry, and he mine.

There is nothing like a quote from Shakespeare to set all matters into perspective, Mound. Thank you.

Yup, yup, I'm green with envy (not Green, just green ;) ) that the Albertans of all people suddenly seem to have an NDP that gets things done.

Here's hoping they win. Worth it for the looks on the federal Cons' faces alone!

Anyong....It will wipe the smile off the faces of the PC's.

Boy, the only Cons Provinces after this would be NL and NS (I think) and that pseudo Cons province, SK.

The closet must be looking even better, eh?

BC is most definitely not a Lib province. It's a SoCred province. Which is in essence a Con.

Well, majority! The Notley Crue really pulled it off! Hurrah!

The cloudy lining: Now I can't mock Alberta any more. If anything, the reverse--I'm from a province where the semi-left seems unable to shoot straight. They're going to be charging royalties and doing sane things while our premier doubles down on liquid natural gas which makes no sense economically let alone ecologically. Time for our bunch to learn something from Alberta . . . something like, try not to be completely bloody useless.

Notley and her husband worked for the BC NDP during the 90s. The Harcourt years.

Then they went back to Alta.

I wonder if they saw the writing on the wall even then.

Nope! No confusion at all. My account was compromised and so typed Anyong at the beginning of my comment so you would know it was me. Smart huh?

Is that a scold? Hmmm! I see where I am going to have to put my better foot forward.